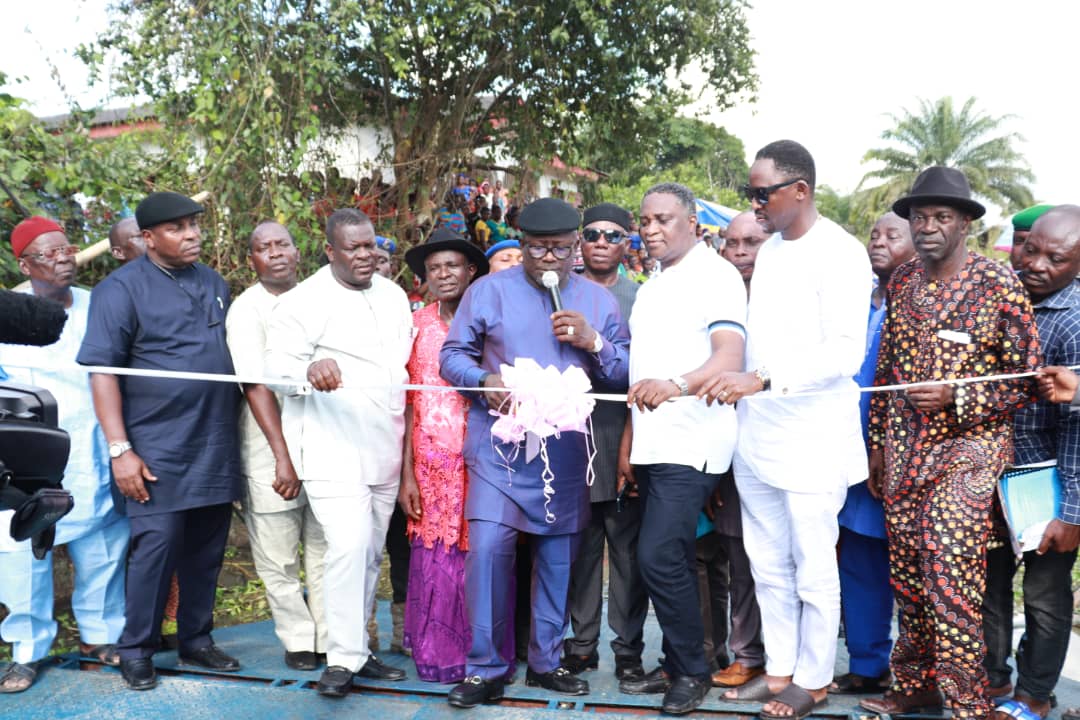 The Speaker of the Delta State House of Assembly, Rt Hon Sheriff Oborevwori has said that the State Governor, Senator Dr Ifeanyi Arthur Okowa is determined to create sustainable economic development across the 25 Local Government Areas of the State and enjoined Deltans to continue to support the policies and programmes of the state government.

According to the Speaker who represented Governor Okowa at the Commissioning ceremony, the  Vision is anchored on his administration’s Smart  Agenda policy, adding that the summary of the policy is hinged on job and wealth creation, reformation of education, agriculture and the health sectors, development of physical infrastructures, and rural-urban integration through strategic road network.

He said that;   “It is  my great pleasure to be here on behalf of His Excellency, Senator Dr. Ifeanyi Okowa, our dear Governor, for the commissioning of the Pontoon and Waiting Shield for Isoko and Ndokwa communities in Ndokwa East Local Government Area. On behalf of our amiable Governor and the Delta State Government, I would like to sincerely congratulate the Isoko and Ndokwa communities, who are the primary beneficiaries of this laudable project and indeed, the entire people of Ndokwa East Local Government Area for the completion and commissioning of this project. Permit me to also congratulate the Isoko Development Union (IDU) for their efforts and cooperation in ensuring the completion of this project”.

“His Excellency, Senator Dr. Ifeanyi Okowa, specially asked me to extend his warm regard to the people of Ndokwa East Local Government Area, for their relentless support for his Government and to the Peoples Democratic Party, PDP. For his great love for you people, the Governor would have loved to be here to personally commission this project, but he is constrained by national assignment. Nonetheless, he has carefully delegated me to commission this project on his behalf”, Rt Hon Oborevwori said.

“Out of this number, over 263 of the projects have been completed and commissioned while others are at various stages of completion. A significant number of these roads are located in rural communities”, he said.

In the health sector,  he stated,  the Okowa’s administration was  among the first in the country to establish Universal Health Coverage for her people, adding that; “The  Delta State Contributory Health Commission was passed into law in 2015. The focus of this contributory scheme is to make healthcare accessible to the poor and vulnerable in the State. In addition to this scheme, there are also 440 Primary Health Care Facilities in the 25 Local Government Areas of the State to provide primary health care services to our people”.

He  also said that; “The Okowa’s administration has equally intervened in the education sector by repositioning technical and vocational education in the State. Above all, His Excellency’s administration in the last four years has strived to build and maintain peace across the State. This of course was made possible by the active role of our traditional rulers and the understanding and cooperation of our people”.

Rt.Hon Oborevwori used the   opportunity to call on   the people of Ndokwa East Local Government Area and indeed all Deltans to continue to support the policies and programmes of the Okowa’s administration, noting that; “By so doing, his promise for prosperity, peace and progress will culminate in a stronger Delta”.

The Speaker who stated that the    completion of the  Pontoon and Waiting Shield was  a fulfillment of the Governor’s promise   to integrate the  rural communities with  urban centers said the   project  will help resolve the transport disruption experienced over the years by the  people.

“It will facilitate the movement of humans, goods and services in and around the Isoko and Ndokwa communities in this Local Government, and also link these communities with other parts of the State. Moreover, this project will spur economic development in your communities and will attract private investors to take advantage of the numerous opportunities that abound here”, the Speaker added.