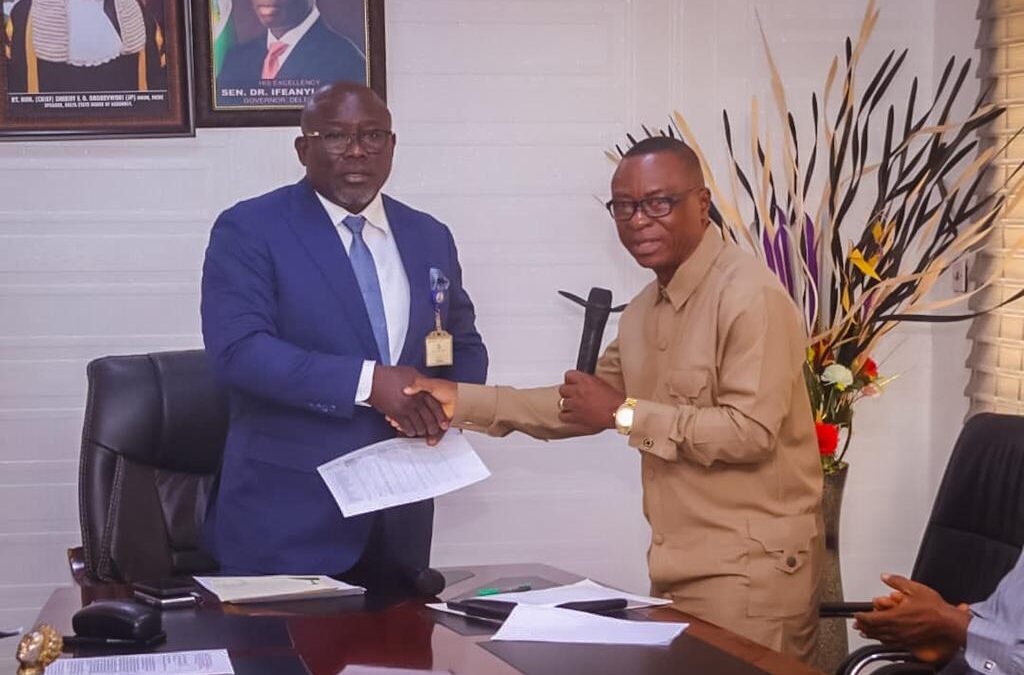 According to the State PDP Governorship Candidate who is also the Speaker of the Delta State House of Assembly, the Commission should remain independent and unbiased as it has always been.

He said that the Delta State House of Assembly as an institution has always maintained a cordial relationship with the Commission, saying that; “And we hope to continue in that regard”.

“Now that campaigns for national and state elections have commenced earnestly, I want to appeal to your Commission to provide a level playing field for all the candidates irrespective of political parties. The Commission should remain independent and unbiased as it has always been. We believe in your ability to conduct free and fair elections in the State and we will continue to trust in your Commission’s credibility in the 2023 general elections”, the Delta State PDP Governorship Candidate said.

He also said that; “I want to commend you for choosing the Assembly as one of your first port of call for your Commission’s advocacy geared toward PVC Collection/ Political Campaign Sensitization in the State. This is a smart decision by your Commission. I say this because the Assembly is an assemblage of all the representatives of the people at the state level. When you get it right with the Assembly, I can assure you that your work is half done”.

“Honourable Resident Commissioner, let me seize this opportunity to thank you and your Commission for the just concluded continuous Voter Registration Exercise ( CVR) in the State. The Exercise was seamless and provided opportunity for Deltans and other residents who are of voting age to be registered for the forthcoming general elections”, he stated.

“As representatives of the people and major stakeholders in the political community, we have always stressed to our constituents in various constituency engagements the need for them to collect their PVCs. Your visit today has reinforced our commitment to further push those that have not collected their PVCs to do so”, he added.

Earlier, the Resident Electoral Commissioner, Rev. Monday Udoh Tom said that; “At the moment, while the collection of the Permanent Voters Card(PVC) is on-going, political campaigns for presidential , National Assembly , Governorship and State House of Assembly has since commenced, which forms the kernel of today’s advocacy to members of the State House of Assembly”.

“The Possession of the PVC , Mr. Speaker is a key eligibility criteria for those who desire to come out on any of the election days to give expression to their choices, through the ballot box, hence the need to engage with critical stakeholders in Delta State, to help sensitize their constituents on the needs to go and collect their PVCs, both old and new”, he added.

He also said; “Mr. Speaker may wish to note that, as we speak, the Commission carried over 244,715 uncollected PVCs from the 2019 general elections, while it has so far received about 69,946 PVCs, for those who registered between June –December 2021 and 17,000 transfer PVCs, bringing the stock of PVCs held by the Commission, at the moment , to well over 300,000 cards lying in the Commission’s 25 LGA offices in the state”.

“In addition to the numbers above, we are expecting more PVCs from those who registered between January –July 2022, which will definitely increase the stock of PVCs held by the Commission. We are therefore concerned that, most registrants including those who registered in June –December 2021, have not showed up to collect their PVCs.
Our visit today is therefore to solicit the cooperation of members of this august body to take this information back to their respective constituents on the need to collect their PVCs, mainly because unlike in the previous election, the use of the number of accredited voters, rather than registered voters, in the event of determination of inconclusive election, has now made the imperative of collecting the PVC an overriding factor”, he stated.