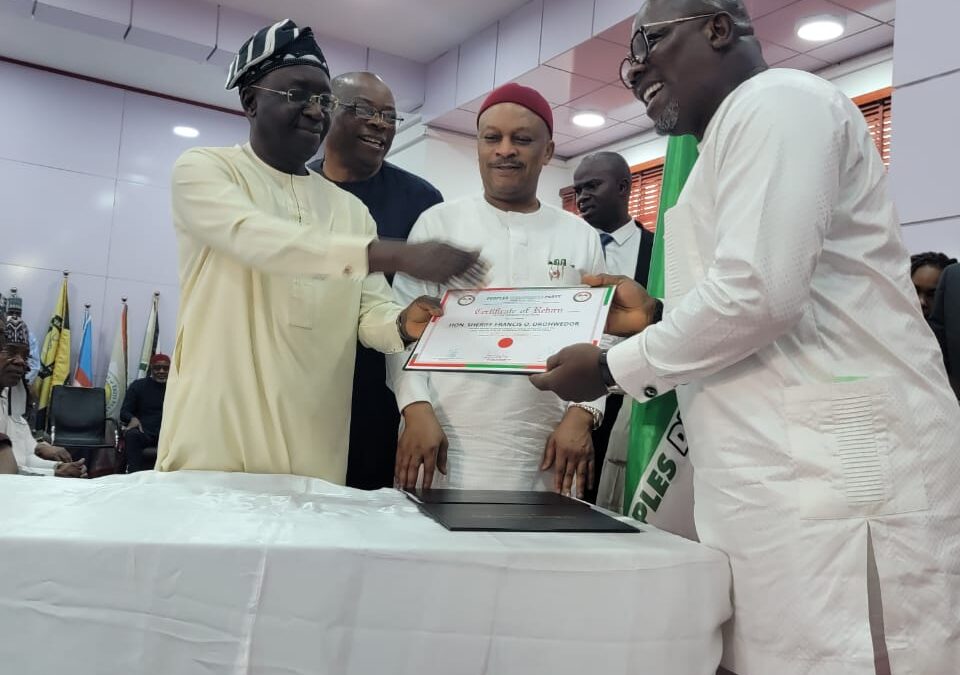 The Deputy Majority Leader of Udu Legislative Arm, Hon (Evang.) Emmanuel Ogolo has congratulated the Speaker of the Delta State House of Assembly, Rt Hon Sheriff Francis Orohwedor Oborevwori on his emergence as the PDP Governorship Candidate in the State and the successful presentation of the Certificate of return to him by the People’s Democratic Party, (PDP).

In a press release on Tuesday, June 7th, 2022, he hailed the Speaker for his victory at the recently conducted PDP Governorship Primary in the State capital, Asaba.

According to him, the emergence of Rt Hon Oborevwori as the Delta State PDP Governorship Candidate was the best thing to have happened to the state.

Describing the Delta PDP Governorship Primary as free, fair and credible, the Deputy Majority Leader of the Udu Legislative Arm held out he was glad that the delegates made the people of the state proud by picking the Speaker of the State House of Assembly as the 2023 Delta State Governorship Standard bearer.

He noted in the press release that; “I wish to congratulate the longest speaker in the history of the Delta State House of Assembly and National Deputy Chairman of the Conference of Speakers of state legislatures of Nigeria, Rt Hon Sheriff Oborevwori on his victory at the Wednesday, May 25th, 2022 primaries of the Peoples Democratic Party held in Asaba, the state capital. The delegates took the best decision and Delta State is going to be better for it”.

“Also, I want to felicitate with the Delta State PDP Governorship Candidate, Rt Hon Sheriff Oborevwori on the presentation of the certificate of return to him today, Tuesday, June 7th, 2022. With this, the coast is very clear for the Speaker to participate fully in the 2023 general elections where I am convinced he will be elected as the governor of Delta State.