COMMUNIQUE ISSUED AT THE END OF THE GENERAL MEETING OF THE CONFERENCE OF SPEAKERS OF STATE LEGISLATURES OF NIGERIA,

COMMUNIQUE ISSUED AT THE END OF THE GENERAL MEETING OF THE CONFERENCE OF SPEAKERS OF STATE LEGISLATURES OF NIGERIA, HELD IN GUSAU, ZAMFARA STATE ON THE 17TH MARCH, 2018 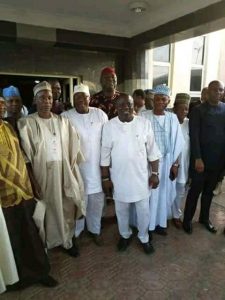 1 The Conference condoles with the immediate families, the members of the National Assembly and the people of Bauchi state over the sad demise of Senator Ali Wakili, who until his death the senator representing Bauchi South Senatorial District of Bauchi State, the Conference prays god grants the departed soul eternal rest and the family the fortitude to bear the loss;

2 The Conference commended all the major stakeholders in the ongoing constitution amendment exercise for exhibiting a great spirit of patriotism in passing the alterations proposed by the National Assembly and ratified by the State Assemblies in good time of this administration, the Conference calls on Mr President to equally ensure speedy assent of the Bills;

3 The Conference commiserates with the people of Yobe State over the recent abduction of the 110 Dapchi girls and the families of the victims of the various clashes across the country;

4 The Conference appealed to the relevant security agencies to intensify their efforts with a view to curbing the nefarious activities of criminally minded people who have been terrorizing the innocent people across the country;

5 The Conference commended the Speaker of Zamfara State, Rt. Hon Sanusi Garba Rikiji for hosting the first quarter general meeting of the Conference of Speakers of State Legislatures of Nigeria in the year 2018;

The Conference also commended the Governor of Zamfara State, Rt. Hon Abdulaziz Yari (Shatiman Zamfara) who doubles as the Chairman of Nigeria Governors’ Forum for the landmark achievements of his administration in spite of the daunting economic and security challenges in the country;