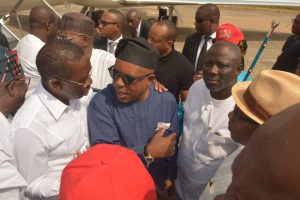 NATIONAL Chairman of the Peoples Democratic Party (PDP), Prince Uche Secondus has said the All Progressive Congress (APC) failure to provide good governance is a yardstick for Nigerians to vote for candidates of the PDP in the 2019 general elections.

Prince Secondus who was addressing leaders of the PDP in Asaba on Sunday shortly before the commencement of a consultative meeting between the national working committee of the PDP and Governors who won their elections on the platform of the PDP, expressed confidence that Nigerians will speak with one voice through their voters’ cards by voting for the PDP in the 2019 general elections.

According to him, “the weakest point in the history of the PDP is that we lost in the 2015 elections but, we should take advantage of the monumental failure of the APC, they came with a government of vengeance, we must emphasise that our people must have voters’ cards because Nigerians want us to come together and rescue the country in 2019.”

He disclosed that the PDP will wrestle power from the APC through aggressive awareness campaign for members of the party at the local government and ward levels to have their voters’ cards, assuring that the PDP has been repositioned with strong emphasis on the power of the people, the electorates who will always be given the chance to make their choice in a free, and fair manner without fear.

The Chairman, lauded the programmes of Governor Okowa’s administration especially in the areas of job and wealth creation, compulsory health insurance scheme, provision of infrastructure, among others, asserting, “Governor Okowa is a performing Governor, there is no way you will count 1, 2, 3 Governor who are working without counting Okowa, he is brilliant, an achiever; of a truth, you (Governor Okowa) are doing very well and we will ask our Governors to key into your programmes because, they are well thought-out and targeted at the people at the grassroots as the beneficiaries.”

Governor of Rivers State, Barr. Nyesom Wike said the desire of Nigerians is for the PDP to take over power at the center in 2019, noting that based on performance, there is no fear about the party losing any of the states where they won the governorship position.
Delta State Governor, Senator Dr Ifeanyi Okowa commended the NWC for choosing Delta State for its meeting and used the occasion to reel out some of the achievements of his administration in the health, and education sectors.

He also, scored his administration high in peace building, job and wealth creation, ensuring the implementation of the compulsory health insurance scheme, among others, disclosing that based on the love the people of the state have for the PDP, they voted massively for the party in the January 6, 2018 local government elections.