WE ARE OUT TO GIVE DELTANS A BETTER DEAL, SAYS OBOREVWORI 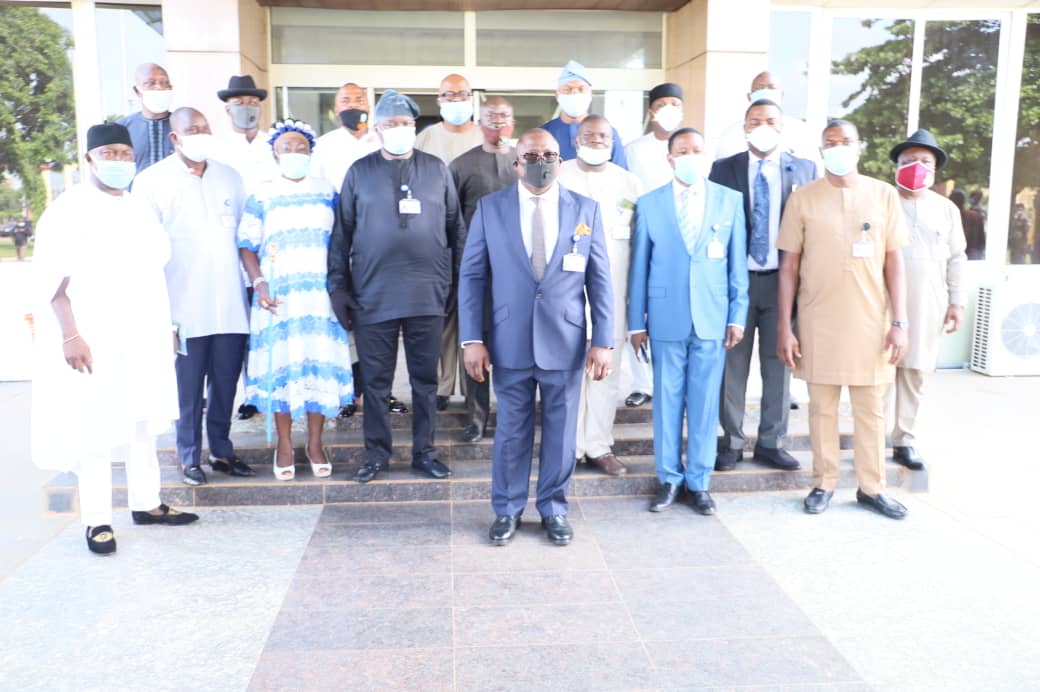 The  Speaker of the Delta State House of Assembly, Rt Hon Sheriff Oborevwori has said that there is a cordial working relationship between the Executive and the Legislature with the aim of giving Deltans a better deal.

At a media briefing on Wednesday,  June 10, 202O to Commemorate the First Anniversary of the Seventh Assembly, the Speaker disclosed that during the period under review,  the House has been opened to constructive engagements with the  Executive in a  bid to move the state forward.

According to the Speaker who was flanked by Principal Officers and other members of the House, said that  with the end of the First Session; “We are stepping into the Second Session with a lot of zeal,  hope and confidence. It is therefore our desire to continue to improve on our performance as we progress into the Second Session”.

“As you are already aware, the Seventh Assembly was inaugurated on Wednesday, 10th June,  2019 with pump and pageantry. However, prior to the inauguration,  the Management of the House rode on the gains of the  Sixth Assembly and put together pre-induction programmes for Members-Elect of the Seventh Assembly. The essence was to birth a virile and vibrant Assembly for the State”, Rt Hon Oborevwori said.

He also said that; “You   will recall that two years ago I had the privilege of sharing our success story of the Sixth Assembly with you, and as expected, that narrative has put a burden of high expectation on the Seventh Assembly.  I can assure that we have not rested on our oars in making sure that the Seventh Assembly will continue to drive positive change and remain committed to the promotion of the rule of law, democratic tenets and ethos”.

Rt.Hon Oborevwori revealed  that after the inauguration of the Seventh Assembly,  the House Constituted 30 Special and Standing Committees in line with the provisions of Section 103 of the  Constitution of the Federal Republic of Nigeria, 1999  (as amended ) and Order 15 of the  Rules of the House,  for the effective and efficient legislative activities of the House.

He added that in the  period under review,  Fourteen Bills  were presented to the House,  ten were Executive Bills while four were private Members Bills.

” The Bills received were 14, Bills passed 9, Bills Assented to 9, Bills Awaiting Assent zero and Pending  Bills 5. Furthermore,  under the same period, a total number of 66 Motions were received and 66  Resolutions were adopted accordingly”, the Speaker said.

The Seventh Assembly, according to him,  decided to improve the aesthetics of the Complex and the  Legislators’  quarters to provide a  conducive working environment for Members and staff and listed key areas of needs identified for improvement to include;  provision of water,  interlocking of the Complex,  construction of cesspools to contain the flow of water,  maintenance and  renovation of the printing press,  upgrading/renovation of  committee rooms and the press centre, beautification of the  Legislators’ Quarters and general face-lift of the Assembly Complex.

According to him,  in spite of the Coronavirus pandemic and the attendant health risk,  the Leadership of the House in line with the State Government’s guidelines and NCDC protocols,  devised a means to enable the House sit at plenary to consider and pass critical Finance Bills to effectively position the state in these trying times.

“Honourable Members of the Seventh Assembly have actively engaged in

constituency visits and town hall meetings to feel the pulse of their constituents, receive feedbacks and also to promote government programmes and policies. Members through Committees of the House have held Public Hearings with stake holders and members of the public and received inputs that have helped the legislative process. It is also worthy of note that during the lockdown by the State government, Members of the House provided palliatives to help constituents cope with the hardship occasioned by the Corona Virus pandemic. We are indeed grateful to all our constituents and Deltans for the confidence they have reposed in the House”, he stated.

Rt.Hon Oborevwori used the occasion to thank the state governor, Senator Dr Ifeanyi Okowa for his support to the  Legislature, saying; “We are indeed grateful to His Excellency for sustaining and maintaining the harmonious working relationship between the Executive and the Legislature”.

He noted that the Assembly in the period under review has enjoyed industrial harmony between the leadership of the House and the Union and said; “I want to specially thank the Leadership of the Parliamentary Staff Association of Nigeria (PASAN ) and to urge them to sustain the existing peace and always resort to dialogue whenever the need arises”.

The Speaker who expressed gratitude to his Colleagues for the quality advice, cooperation and unwavering support platform provided for the leadership of the House to pilot the affairs of the House for the period under review, also thanked Traditional rulers in the state for their fatherly advice.

Rt Hon Oborevwori equally commended Management and staff of the House for their dedication and commitment to duty, which he pointed out,  has rub off positively in the  success recorded thus far.

” I wish to express my profound gratitude to the media for your unflinching support, reportage and promotion of the activities of the house for the period under review and your  patience throughout this press briefing. You have done excellently well and exhibited high level of professionalism in the  discharge of your duties as watch dog of the society”, he said.

The Speaker who was re-elected exactly a year today to led the House, on behalf of his Colleagues assured Deltans that; “We have the responsibility to ensure that the choice that we make is one that advances the rights and interests of our people”.