VALEDICTORY SPEECH DELIVERED BY RT. HON. (CHIEF) SHERIFF F.O. OBOREVWORI (JP) MNIM, FICMC AT THE VALEDICTORY SESSION OF THE SIXTH ASSEMBLY OF DELTA STATE HOUSE OF ASSEMBLY ON THURSDAY, 30TH DAY OF MAY, 2019 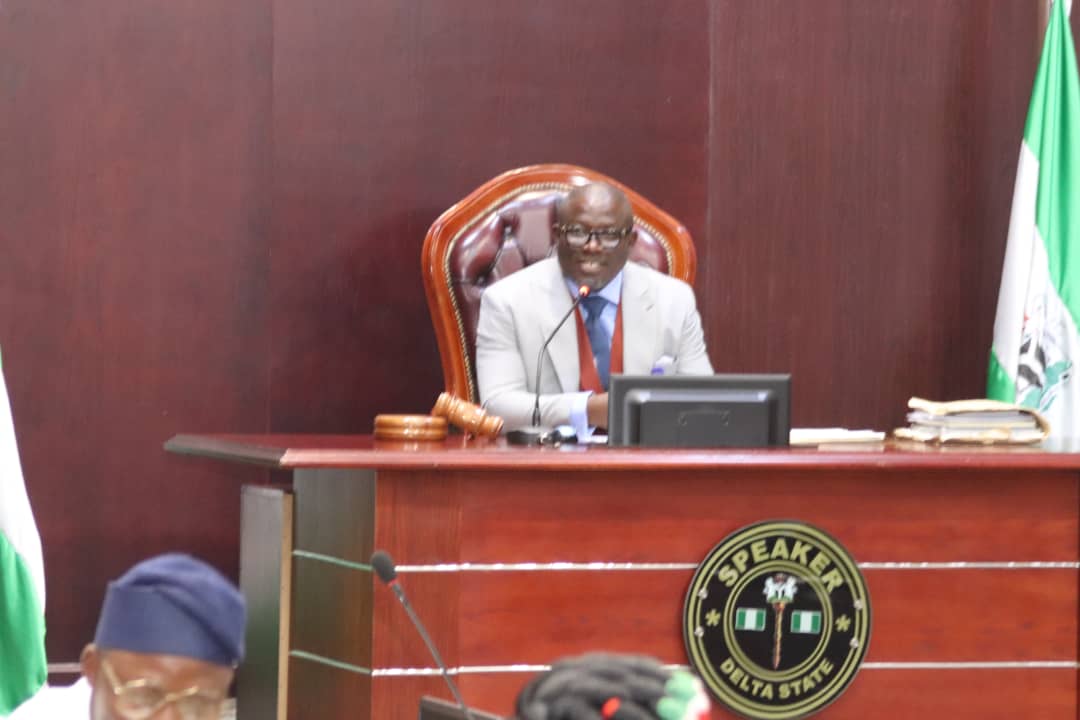 Today is a milestone in the life of the Sixth Assembly.  The plenary today is ceremonial, it is our valedictory sitting. I will begin my speech by paying tribute to all the members that have spoken beautifully and frankly as well.  I am overwhelmed by the outpouring of love by members. I have also taken note of your reservations in good stride. You have all demonstrated in your speeches that as members of Delta State Legislative family, we have in the course of the past four years, agreed, disagreed and sometimes disagreed to agree in various issues in our duties as members. I thank you sincerely.

My passion for the legislature dates back to 2007.  However, in 2011, I made an unsuccessful attempt for the House.  Fortunately, in 2015, my constituents found me worthy to represent them in the Sixth Assembly.

I came to the Assembly with a lot of hope and aspirations.  I knew before hand that the Legislature is the right platform for me to attract developments for my people.  So on the 8th of June, 2015 when the Sixth Assembly was inaugurated, I took certain cardinal resolutions towards realizing my goals in the Assembly.  I made a promise to regularly attend sittings of the House as well as committee sittings.

I also decided to open my heart to learn the ropes in legislative practice and procedures.  I took punctuality as a watchword in the business of the House.  I also believe in teamwork for the business of the Sixth Assembly.  Later, with the turn of fate, I added feedback mechanism to the resolutions.  These were my driving force and parameters with which I measured my actions and inactions in the House.

I must not also forget to mention my mission and vision as a member of the Sixth Assembly.  My mission was to give efficient and effective representation for my people, collaborate and harness ideas with my colleagues to engender peace, harmony and development across the twenty-nine (29) constituencies in the State.  While my vision was to ensure partnership in progress between the legislature and the other arms of government for an improved Delta State.

As the saying goes, nobody knows the chart of destiny.  On Thursday, 11th May, 2017 there was a change of top leadership of the House and fate bestowed on me, the Speakership of the House.  Members of the House unanimously elected me the Speaker of the Sixth Assembly.  I want each and every one of you to know that I owe you a debt of gratitude for this honour.  I was not the most qualified nor the least qualified but you chose me in your magnanimity.  God Almighty will surely reward you for this honour.

The Sixth Assembly was inaugurated on Monday, 8th June, 2015.  In the course of the Legislative activities of the Sixth Assembly, the House received a total number of eighty-three (83) Bills.  Out of the Bills received by the House forty-nine (49) were passed, two (2) fell through the legislative processes, six (6) were merged and twenty-six (26) are still pending in the House.  However, out of the forty-nine Bills that were passed by the House, forty-five (45) of them were assented to by the Governor, His Excellency Senator Dr. Ifeanyi Arthur Okowa.  Four (4) of the Bills were however not assented to.

• Constitution of the Federal Republic of Nigeria (Fourth Alteration) Act, 2017

 Abuse of narcotic drugs and other psychotropic substances in Delta State

to mention but a few.

Furthermore, the Sixth Assembly synchronized with the Executive Arm of Government to hasten development to the nooks and crannies of the State.  We were able to achieve this because we regarded the State budget as the most essential policy tool for development.  To the credit of the Sixth Assembly, the Appropriation Law, that is, the State Budgets for 2018 and 2019 were presented, considered and passed at record time. Both Budgets were assented to in December 2017 and 2018 respectively.

Away from Bills and Motions, the Sixth Assembly also placed premium on human capital development.  To attain excellence in our duties, members of the Sixth Assembly were afforded training in one of the best schools in the world.  Members and top management of the House were trained in Management and Leadership skills by the famous and reputable London School of Economics in 2018.  Legislative prowess of members were also boosted in 2017 at the International Law Institute, Washington DC.

When the Sixth Assembly was inaugurated in June 2015, we met regular power failure challenges on ground.  The light was not stable in the office and at the quarters.  The situation was an impediment to our work.  The leadership of the House with the support of members migrated the office and the quarters to the 33 KVA line.  Today, the House now functions with minimal power interruption.

My dear colleagues, we could not have achieved these feats without your corporation and support. I therefore wish to thank profusely the Principal Officers and indeed all the members of the House.

Let me specially thank Rt. Hon. (Chief) Peter Onwusanya for always bringing his wealth of experience to bear in our deliberations.  He was a stabilizing force in the House.  Thank you.  To my brother Rt. Hon. (Chief) Monday Igbuya, I thank you also for your contributions to the House.  Hon. (Prince) Johnson Erijo, you are the legislative Socrates of the House.  The Seventh Assembly will miss your reservoir of legislative experience.  Hon. Denis Omovie Esq; your legacy in the House will continue to speak for you, thank you my brother.  Hon. Daniel Mayuku Esq; you remain my reliable and dependable brother, thank you so much. Hon. Engr. Emeka Nwaobi, I thank you for your contributions to the House, both in plenary and in your Committee, especially as vice chairman, Committee on Appropriation and Finance. God bless you. Hon. Angela Nwaka, thank you for your contributions in plenary.  Hon. (Chief) Daniel Yingi, I cherish your friendship and support.  Hon. Kennedy Daubry, thank you for your support as well. Hon. (Chief) Evance Ivwurie, you are a man that pursue your course with a passion. You made your mark in your assignment as Chairman Committee on Works.  The House is grateful to you. Hon. Erhiatake Ibori-Suenu, my wonderful sister, I am grateful for your support.  Thank you for your contributions for the appropriation process in the House. Hon. Anthony Elekeokwuri, your name is now synonymous with Public Account Committee (PAC). Your commitment and sense of duty is not in doubt.  Thank you so much. Hon. Festus Chukwuyem Okoh, thank you for being there for me. You remain a good friend to me though you have legislatively refused to turn in your report for my Bill. Hon. Orezi Jane Edna Esievo Esq; you are soft but principled, you always insist on the right things to be done at all times.  The House will surely miss your voice. Hon. Azuka Azaka, you are always objective with issues, keep it up my brother. Hon. (Alaowei) Ayibatonye Timi Ph.D, the perfect gentleman of the House.  Your attention to details stands you out among your equals.  Thank you for your contributions to the House.  Hon. (Chief) Peter Okagbare Uviejitobor, thank you for your zeal to always air your views in matters before the House. Hon. (Omiragua) Samuel Mariere Esq; your tenacity on issues cannot be forgotten.  You are a sound mind.  Hon. (Comr.) Izeze Rume Yakubu Reuben Esq; the legislative activist.  You know I cherish your drive for knowledge but legislative business is about horse-trading; sometimes you give, some other times you take. You are a wonderful brother. Hon. Dr. Alphonsus Ojo, thank you for your passion and sense of duty. Hon. Efe Ofobruku, you always make the House lively.  In the midst of your jokes you push home your points.  Thank you so much. Hon. Princess Shola Ogbemi-Daibo, my sister from the great Warri kingdom.  Within a short space of time that you joined the House, you have been able to master the rudiments of the House. I am grateful for your support to the leadership of the House. Hon. Prince Eric Oharisi, Majority Whip, you are my brother any time any day.  Hon. Prince Michael Diden, Deputy Chief Whip, I regard you dearly in my heart.  Hon. Engr. Oboro Preyor, Deputy Majority Leader, thanks for being there for me at all times.  You are a dependable friend. Hon. (Evang.) Princess Pat Ajudua Esq; Chief Whip, God will bless you for your support.  Hon. Tim Kome Owhefere (KSC) Esq; Majority Leader, thank you for being there for me.  You are surely a distinctive leader.  Rt. Hon. (Comr.) Friday Ossai Osanebi, my Deputy Speaker, I salute you. you are very young but mighty.  I treasure the times we worked together as a team. God bless you.  I will not fail to acknowledge our late colleague, Hon. (Mrs.) Beatrice Omawumi Udoh, who passed away while in active service.  May her soul and the souls of all the faithful departed rest in peace, amen.

My dear colleagues, the Sixth Assembly was a great team, regrettably, some of our colleagues are exiting from the House now. Nonetheless, they remain forever non-sitting members of the Delta State House of Assembly.  For those members that are leaving, I wish you the best of luck in your future endeavours.   I also request on behalf of the House that any time your knowledge and services are needed, you would be kind enough to make yourself available for us.

On this note, I want to sincerely thank God Almighty for seeing us through these four years. According to Romans 9:16 God says “so then it is not of him that willeth, nor of him that runneth but of God that showeth mercy”.  I therefore return all the achievements, successes and glory back to God.

Let me specially thank His Excellency, Senator Dr. Ifeanyi Arthur Okowa, our dear Governor, for his support and understanding for the House.  He is one man that respects the fundamentals of the separation of powers that exist among the three arms of government.  We are grateful to you sir.

May I also thank all our constituents for giving us the opportunity to represent them in the Sixth Assembly.  Life is an opportunity for continuous learning.  No one is perfect.  If in the course of discharging our duties we have erred in any way, I ask on behalf of all the members for your forgiveness.  It may not have been done deliberately.  I also know that in public service, ones actions may not be acceptable to all persons at the same time.  Sometimes, the dissenting views might be cogent.  But I want to assure you that whatever we did as a House was for the good of the State.

Finally, I wish to thank the Clerk, Management and staff of the Assembly for their support for the leadership and members of the House.  I must tell you, we enjoyed working with your team.  The Assembly staff are one of the best in the country. We ask that you keep up your good work for the Seventh Assembly.  I also want to appreciate our Aides, we acknowledge all your efforts and support for us. Thank you for being there for us.

I would like to end with these words of advice:

“The democracy is ours and is for us, let us play our parts decently and with a sense of responsibility, whenever and wherever we are called to serve”.