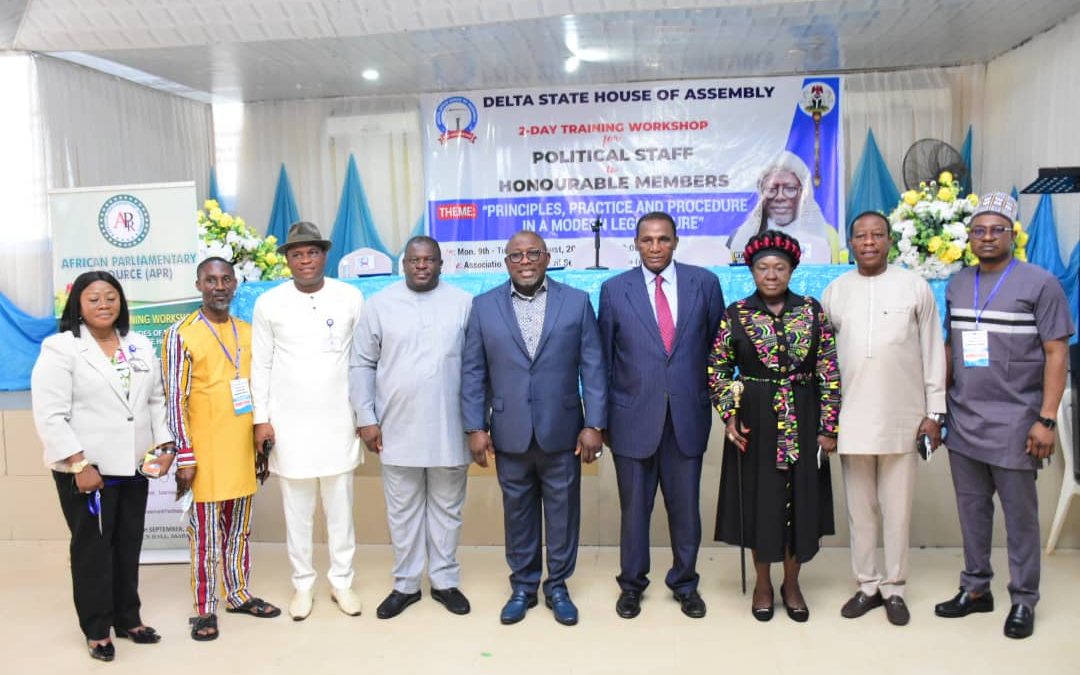 A 2-Day Training Workshop for Political Support Staff of Honourable Members of the Delta State House of Assembly has opened in Asaba with a call on participants to effectively compliment the effort of the House in its drive for peace, good governance and development of the state.

The Speaker, Rt Hon Sheriff Oborevwori, while flagging off the training programme , with the theme: “Principles, Practice and Procedure In A Modern Legislature,” said the role of political aides in the Assembly is crucial and fundamental to the success of their principals in carrying out their legislative business.

Rt Hon Oborevwori flanked by the Deputy Speaker, Rt Hon Ochor Christopher Ocho and some other Principal Officers of the House, explained that there was the need to enhance participants understanding of legislative practice, procedure and the Standing Orders of the House.

The Speaker who promised government’s sustained commitment to capacity building of the workforce, said that the Delta State House of Assembly recognizes the importance of political support staff who are not career civil servants in the Assembly, saying that they contribute immensely to the effective performance of their principals.

He emphasized that legislative staff should have the skills to function well in the Legislature to deliver in the job they were employed to do.

“At this juncture, I should let you know that you are meant to be the engine room of Honourable Members of the House. Whatever your designation, your duty is to complement your boss’s duty of lawmaking, representation and oversight. You must go out of your comfort zone to do research on issues pending before the House to prepare your boss for plenary and Committee meetings. If you are operating in the Constituency office, collate relevant activities for the attention of your boss. Some of those reported activities could be subject of motions that your boss will move on the floor of the House”. Rt Hon Oborevwori stated.

The Speaker added that; “The ultimate aim of this Workshop therefore, is to develop a virile political support staff that will facilitate the work of Honourable Members of the House. It is my belief that this Workshop will equip you to discharge your duties effectively and render excellent services going forward”.

The Clerk of the House, Mrs Lyna Ocholor in her welcome address said the workshop was specifically put together for the Political Aides to Honourable Members of the 7th Assembly to expose them to require knowledge that will make them become more responsive to tasks ahead of them.

“We have assembled the best of instructors who have firm understanding of what is expected of a legislative Aide. Ambassador Jerry Ugokwe is not only a former ambassador but also a former member of the National Assembly. Dr Jake Dan-Azumi is with the National Institute for legislative and Democratic studies, the foremost institution of Democratic Studies in Nigeria., while Mr John Ebikeseye Mutu, is a one time legislative Aide, now the Deputy National Team Leader of ECP and friend of the Nigerian Legislature”, Mrs Ocholor stated.

She said the outcome of the workshop will definitely impact positively on the ability of participants to assist their principals in their legislative assignments.

Several lectures including ‘Principles of Separation of Powers and Doctrine of Checks and Balances’, ‘General Elections of the Legislature and Role of Lawmakers’, ‘The Lawmaking Process and Statutory Instruments’, ‘Overview of the Appreciation Process and Key Concepts in Budgeting’, ‘An Overview of the Committee System and Oversight Process’ and ‘Understanding the Rules of Practice and Procedure in a State House of Assembly’ as well as ‘ the Role of Legislative Aides and how to Manage your Boss’.

Also embedded in the training programme is syndicate sessions and group presentations.