Speakers Worried About Negative Trend Of Insecurity In Nigeria 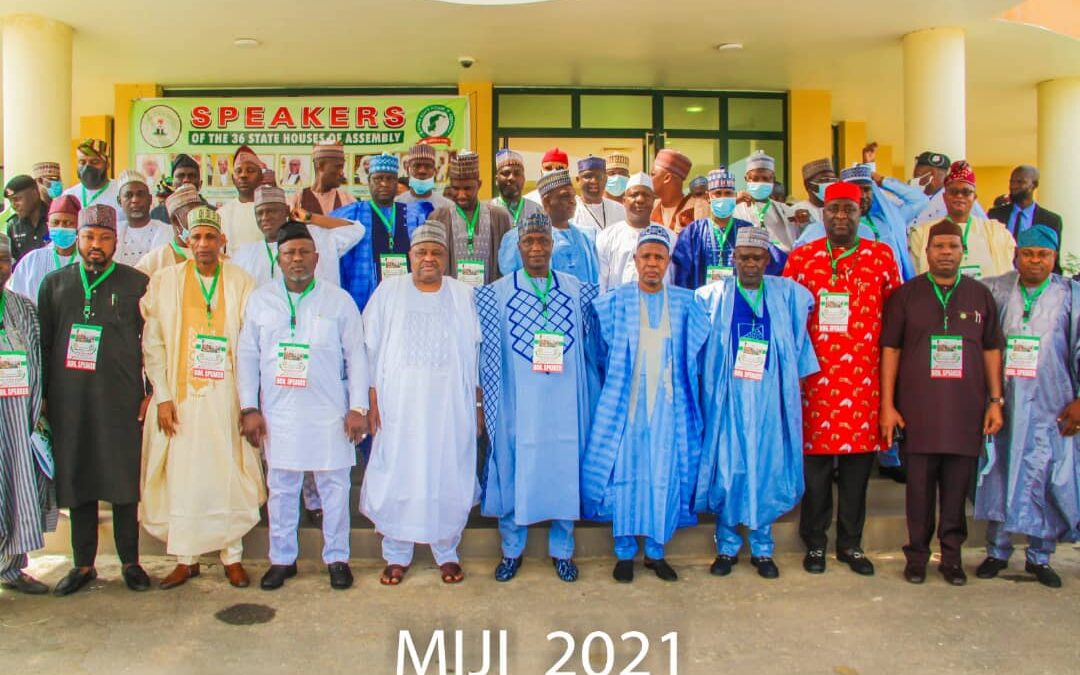 The Conference of Speakers of State Legislatures of Nigeria said that it was disturbed by the negative trend of the menace of insecurity in the nation.

This was disclosed by the Chairman of the Conference and Speaker of the Bauchi State House of Assembly Rt. Hon. Abubakar Y Suleiman during the opening ceremony of the Third Quarter General Meeting Of The Conference of Speakers of state legislatures of Nigeria with the theme; “The Menace of Insecurity in the Country and the Role of State Assemblies to Restore Peace and Order” which held at Presidential Lodge, Muhammadu Buhari House, Katsina, on Saturday, October 23rd, 2021.

He stated that insecurity in the country today has assumed a disturbing dimension and hence constituted a serious threat not only to the economic growth and development but also to the peace and unity of the nation and said therefore, all hands must be on deck to fight the menace for the good of the nation.

He added that; “We have therefore convened this meeting to discuss and proffer solutions to this problem within our constitutional mandate. And we hope legislative frameworks at the sub-national level adopted will go a long way to compliment the efforts of the Federal Government to check the menace of insecurity in the country.”

Rt. Hon. Abubakar Y Suleiman also acknowledged the efforts and deep commitment of Governor Aminu Bello Masari towards ridding Katsina state of every form of criminality with the support and cooperation of the Katsina State House of Assembly under the leadership of Rt. Hon. Tasiu Musa Maigari.

He urged the Governor and his colleagues in the parliament to continue supporting and cooperating with each other in the fight against insecurity and good governance in the State.

The Chairman noted that the efficiency and effectiveness with which the legislative arm can carry out its constitutional mandate depends largely on how financial autonomy to the Legislative arm as provided by the 4th Alteration to the Constitution of the Federal Republic of Nigeria which stated that financial autonomy for both the state legislature and judiciary is very germane for good governance in the country.

While acknowledging and commending the efforts and passion of the Nigeria Governors’ Forum in this regard in general and the individual governors that have assented to Fund Management Bills in their respective states in particular, he called on other state governors to give assents to the noble Bill for effective and efficient implementation of financial autonomy across the nation.

In his welcome address, the Speaker of Katsina State House of Assembly and Vice Chairman Northwest Zone of the Conference, Rt. Hon. Tasiu Maigari expressed the appreciation of the people of Katsina for the opportunity to host the third quarter general meeting of the Conference which he said will help the State greatly as one of the states being hit by insecurity.

According to him, the meeting will provide them an avenue to discuss the role states legislature will play in tackling insecurity and strengthening of democracy in the country.

He pointed out that exemplary leadership of Governor Aminu Bello Masari, cooperation mutual trust and respect between the legislative and executive arms in the the State which result in strong partnership to end security problems and excellent service delivery in the State.

The Speaker of the Delta State House of Assembly, Rt Hon Sheriff Oborevwori who is also the National Deputy Chairman of the Conference of Speakers of state legislatures of Nigeria is attending the Third Quarter General Meeting Of The Conference.