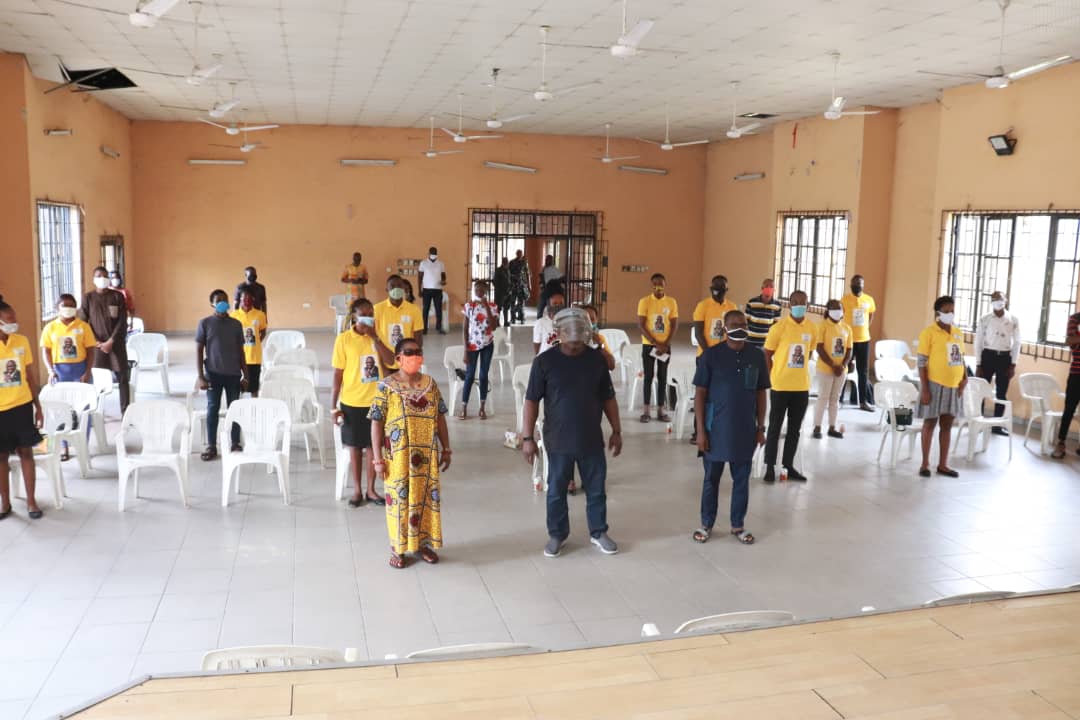 The Sheriff Oborevwori Foundation has disbursed Scholarships to the beneficiaries of the Scheme.

The Speaker of the Delta State House of Assembly, Rt Hon Sheriff F.O. Oborevwori made the presentation of the Cheques to the beneficiaries   on Friday, June 19th,  202O, just as he  presented car gifts to Okpe Political leaders.

The Coordinator of Sheriff Oborevwori Foundation Scholarship/Bursary Committee, Chief  ( Mrs ) Esther E. Onokpasa assisted the Speaker in the presentation of the Cheques to the beneficiaries.

He disclosed  that the sum of Ten Million Naira, (N10,000,000:00) has been deposited in the Foundation’s account for the purpose of the scholarship, adding that the students must get their  N200,000 each  immediately whether the Universities are in session or not, hence the brief ceremony for the presentation of the cheques.

It is worthy of note that  Sheriff Oborevwori Foundation awarded scholarship to indigenous and non indigenous students in public Universities from 200 level to graduation.

The Speaker equally   gave out car gifts to Okpe political leaders, who according to him have been working tirelessly for the success and victory of the party in the local government area.

While handing over  the car keys to the beneficiaries, he commended them for their unalloyed support, saying that they have worked very hard over the years in the Local Government Area.

The Speaker said he was giving out the car gifts as his humble way to appreciate the Leaders and Stakeholders for their continuous support over the years.

In his words; ” Today, we are here to witness the presentation of cars to Leaders and Stakeholders who are not in any appointment. They have worked hard over the years in Okpe Local Government Area and this is my own  little way of appreciating them as I mark my First Year Anniversary of second term in the Seventh Assembly  of the Delta State House of Assembly where all of you sent me to as your representative.  Today too,  we have also  disbursed  Scholarship to the  beneficiaries. Am a man of my words, because a promise made, must be kept”.

The  Speaker explained that the  brief event which was devoid of any fun fare was  initially scheduled to hold on Sunday 14th June, 2020, but  was postponed to Friday 19th June, 2020, in honour of late Chief (Sir) Tom Amioku, who untill his demise was one of the foremost political leaders in Okpe local government area.

He said;  “We actually planned this event for Sunday,  14th June, 2020, but was shifted forward in honour of late Chief (Sir) Tom Amioku. We are going to miss him greatly and the presentation now concided with my birthday today, but everything is low key, no any celebration because there is mourning in our land”.

Those who smiled home with the cars are;

Responding on behalf of others, Chief  Robert Onome, expressed gratitude to the Speaker for the gesture.

He said; “You are very humble and you  have always stood by your words. We will continue to stand by you. It has never happened in this manner before in the  history of our party and the local government area. You are a worthy representative of your people”.

Chief  Daniel  Okoro and Chief J. I. Asini   prayed for the Speaker, saying he  will continue to be a winner.