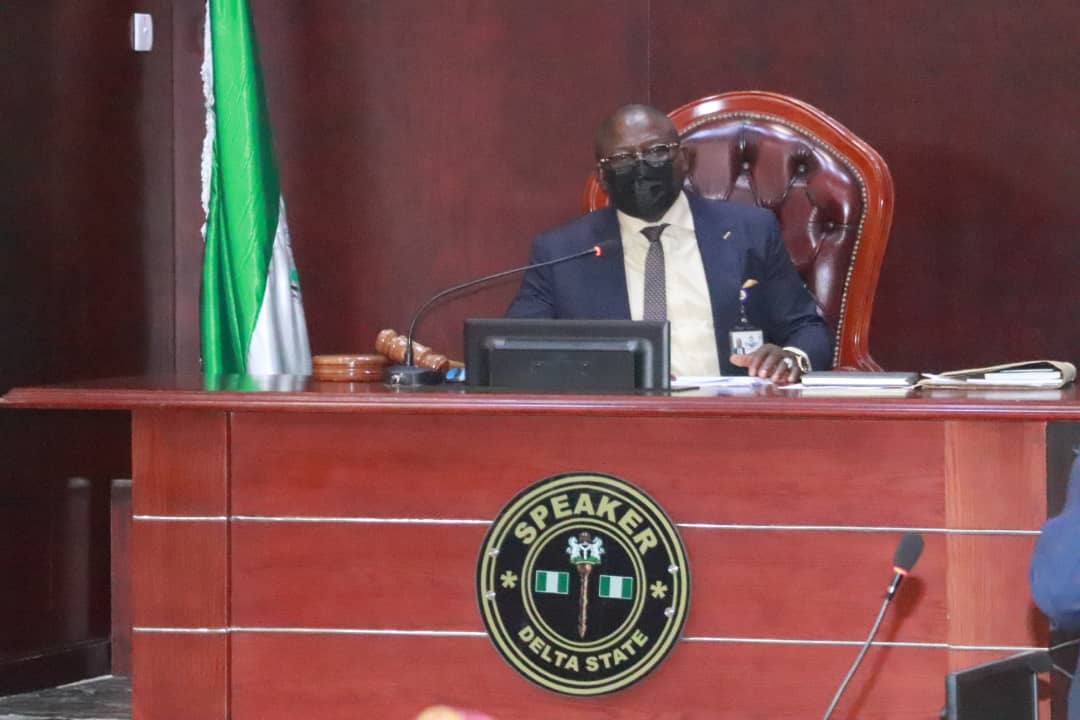 *** SPEAKER ENJOINS MEMBERS TO BRACE UP TO TASK AHEAD

The Delta State House of Assembly, on Tuesday, June 15, 2021 resumed plenary after the nationwide industrial action by the Parliamentary Staff Association of Nigeria (PASAN), with the Speaker, Rt Hon Sheriff Oborevwori, enjoining lawmakers in the State to brace up to the task ahead.

In his welcome address, the Speaker expressed gratitude to God for the peaceful resolution of the strike action over the issue of Financial Automomy for the State Legislatures.

“It is my pleasure to welcome you back to Plenary after a fairly long nationwide industrial action by the Parliamentary Staff Association of Nigeria (PASAN) over the issue of Financial Autonomy for State Legislatures”, he said.

According to him; “I am grateful to God for the peaceful resolution of the strike action after a series of meeting by all the stakeholders which include, the Governors’ Forum, Conference of Speakers of State Legislatures, Minister of Labour and Employment, Attorney-General of the Federation, Chief of Staff to the President and representatives of the Parliamentary Staff Association of Nigeria (PASAN)”.

The Speaker informed members that a Memorandum of Action for the implementation of the Financial Autonomy in the State Legislatures had been drawn up and signed by all relevant stakeholders, adding that; ” It suffices to inform you that in the course of the 3rd Session, we will amend our Fund Management Law and the House of Assembly Service Commission Law to reflect the agreement in the Memorandum of Action”.

“Distinguished Colleagues, let me formally welcome you to the 3rd Session of the 7th Assembly. Members will recall that the House celebrated the 2nd Anniversary of the 7th Assembly on Thursday 10th and Sunday 13th June, 2021 with a Press Briefing and Thanksgiving Service respectively”, Rt Hon Oborevwori said.

He also said that; “I am indeed grateful to God Almighty for a successful Anniversary celebration. On behalf of Principal Officers and Members of the House, I wish to express our profound gratitude to His Excellency, Senator Dr. Ifeanyi Okowa, Governor of Delta State; His Excellency, Barr. Kingsley Burutu Otuaro, Deputy Governor of Delta State; the Acting Chief Judge of the State, Hon. Justice Theresa Diai; the Acting President Customary Court of Appeal, Hon. Justice Patience Elumeze; the Secretary to the State Government (SSG) Chief Patrick Ukah; the Chief of Staff, Government House, Rt. Hon. Festus Ovie Agas; the Head of Service, Mr. Reginald Bayoko mni; Party Leaders and other dignitaries who came to felicitate with us. In the same vein, I also want to specially thank the Anniversary Planning Committee for a job well done”.

Rt Hon Oborevwori informed the House that while the strike action was on, the Senate and the House of Representatives Committees on the Review of the 1999 Constitution, held Public Hearings in Asaba, disclosing that the House was invited and made presentations in line with the position of the State Government on issues of true Federalism.

“My dear colleagues, now that we are back to Plenary to begin the 3rd Session, I enjoin all of us to brace up for the task ahead. As we are all aware, there are backlog of issues to be attended to. Accordingly, I wish to direct Chairmen and members of Committees to immediately resume action on all pending bills, petitions and motions before their Committees”, he stated.

He said that; “On this note, on behalf of Members of the House, I wish to thank His Excellency, Senator Dr. Ifeanyi Okowa, our dear Governor, for his support and respect for the legislature. Similarly, I wish to also appreciate our constituents for their understanding and support for us. As representatives of our people, we will continue to discharge our duties for the welfare and common good of all Deltans.”

The Speaker also seized the opportunity to express his gratitude to his colleagues for their continued cooperation and support for the leadership of the House.

“It is my prayer that God Almighty will reward you immensely for your act of kindness. Furthermore, I wish to commend the Management and Staff of the Assembly for their commitment and dedication to duties. Finally, I wish to welcome all of you to plenary as we commence the 3rd Session of the 7th Assembly”, he added.

Meanwhile, the Speaker of the Delta State House of Assembly, Rt Hon Sheriff Oborevwori has sworn-in Hon Jude Omena Ogbimi as the Honourable Member representing Isoko North Constituency on the floor of the House at the resumption of plenary on Tuesday, June 15th, 2021.