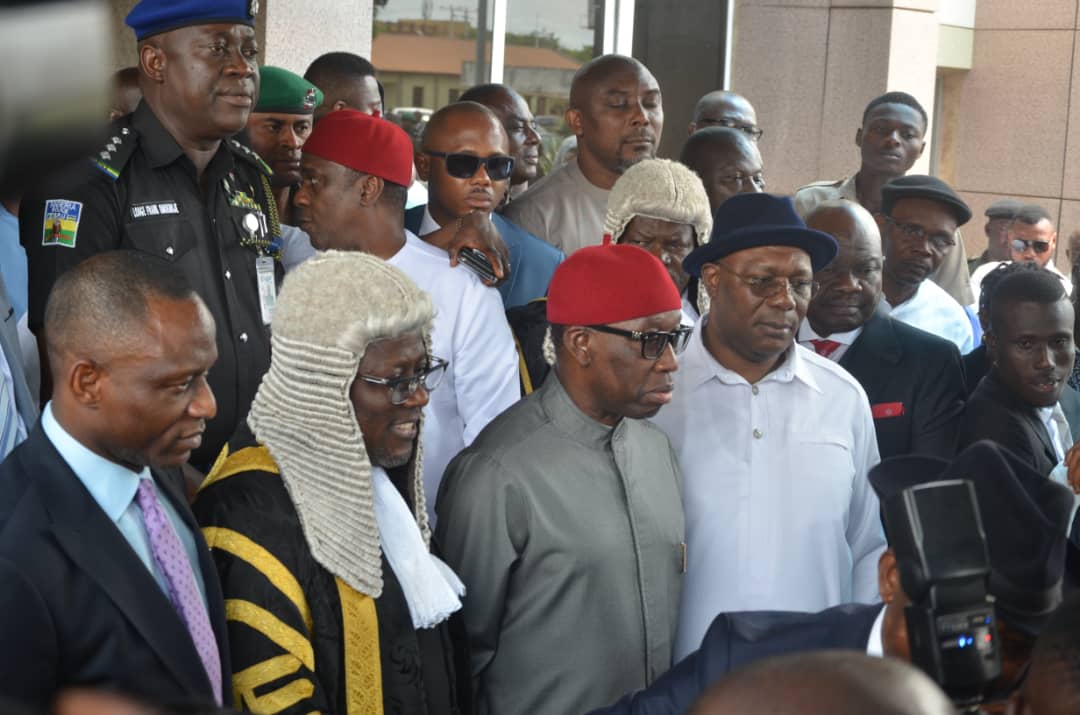 The State Governor, Senator Ifeanyi Okowa has proposed the sum of three hundred and eighty nine billion, one hundred and ninety million naira (N389,190,000,000) for the year 2020 fiscal year to the State House of Assembly.

Governor Okowa disclosed this on Wednesday, November 6, 2019  while presenting the year 2020 proposed budget estimates to the  House , presided over by the Speaker,   Rt Hon   Sheriff Oborevwori.

According to the governor, the sources of funding of the year 2020 proposed budget are  internally generated revenue, statutory allocation including mineral revenue derivation, value added tax and other capital receipts.

Governor Okowa said the proposed budget is consistent with his administration’s agenda to spend more on projects and programmes that would impact directly on the socio economic well being of the people.

He noted that  the proposed year 2020 budget is aimed at achieving fiscal stability and to promote accountability, prioritise efficiency  through stringent control on non productive expenditure as well as to accelerate rural and urban integration and urban renewal through roads and flood control infrastructure, markets development ,housing and sanitation among others.

The Governor said his administration achieved a breakthrough with the Asaba Airport with the approval by the state executive council for the concessioning of the Airport to a consortium of investors noting that the concessioning is for a period of thirty years with annual concession fee of one hundred million  naira payable to the state government.

He said twenty eight billion naira is expected to be pumped into the Airport development by the concessionaire over the next three years.

On the Kwale Industrial Park,  Governor Okowa said the project is designed to profit the competitive advantage of the state in the gas and energy sector and is envisaged to be one of the nation’s biggest location for gas and energy, intensive manufacturing, encompassing ceramics, rubber, methanol, Pulp and paper among others.

The Governor said he just returned from China where a road show was organised for the proposed Kwale industrial Park stressing that it afforded the state government’s delegation the opportunity to market the Park and the state to the Chinese business and investment community.

Governor Okowa said his administration was implementing a public private partnership for the establishment and operation of an Agro Industrial Park at Aboh Ogwashi saying that the Park will be a catalyst of agricultural commodity value chain, create thousands of new jobs and multiply  wealth for the teeming youths and agricultural population.

He further stated that his administration recorded major feat in the construction of roads in riverine communities in Ogulagha and Okerenkoko while the state government has commenced the processing of construction of a massive storm water drainage in Warri, Uvwie and environs to tackle the recurring problem of flooding and environmental degradation.

After the presentation of the proposed budget,   the Speaker,  Rt Hon  Sheriff Oborevwori commended the governor for his achievements and his proposed year 2020 budget christened budget of Sustained Development.

He said; “On behalf of my colleagues and management of the Assembly, I welcome you all to the presentation of the year 2020 Budget by His Excellency, Senator Dr. Ifeanyi Okowa, our dear Governor. Let me specially welcome His Excellency, Senator Dr. Ifeanyi Okowa, to his own House. I say this because, Section 108 of the Constitution of the Federal Republic of Nigeria, 1999 (as amended) grants the Governor passage to our Chambers whenever he desires to address the House”.

According to the Speaker;  ” This  2020 Budget of Sustained  Development is   another milestone in the rapid transformation and development that we have  witnessed in the State since the beginning of this administration. On behalf of my colleagues, I thank His Excellency for the revenue projection and the capital development proposals outlined in the Budget just presented to the House”.

“I believe strongly that after the Assembly’s legislative processing of the Budget, diligent implementation by the Executive and scrupulous over-sighting by the Legislature, the Budget will impact the State economy and the general wellbeing of our people positively”, he said.

The Speaker  stated that as a House;  “We  will continue to cooperate with the Executive to deliver good governance to the State. As at today, with the remarkable support of the Legislature, we are all witnessing the massive infrastructural development across the State and the training and establishment of a good number of our youths in various enterprises and vocations by this administration”.

According to him,  the   House will not relent in  scrutinizing the Budget in line with their  oaths to make law for peace,  order and good government of the State,   adding that; “As   usual, we are duty bound to painstakingly look at the details of the Budget for the purpose of transforming same for the benefit and aspiration of our people”.

Rt.Hon Oborevwori   assured  the Governor  of the readiness of the House  to partner with his  administration in achieving all the goals and targets of building a Stronger Delta with the three pillars of Prosperity, Peace and Progress for all.

The Deputy Speaker, Honourable Ochor Ochor later moved a motion commending the governor for the execution of life transforming projects across the state and promised that the House will pass the budget in record time.

Meanwhile the House has slated Thursday November 7,2019 for the second reading of the year 2020 Appropriations bill.