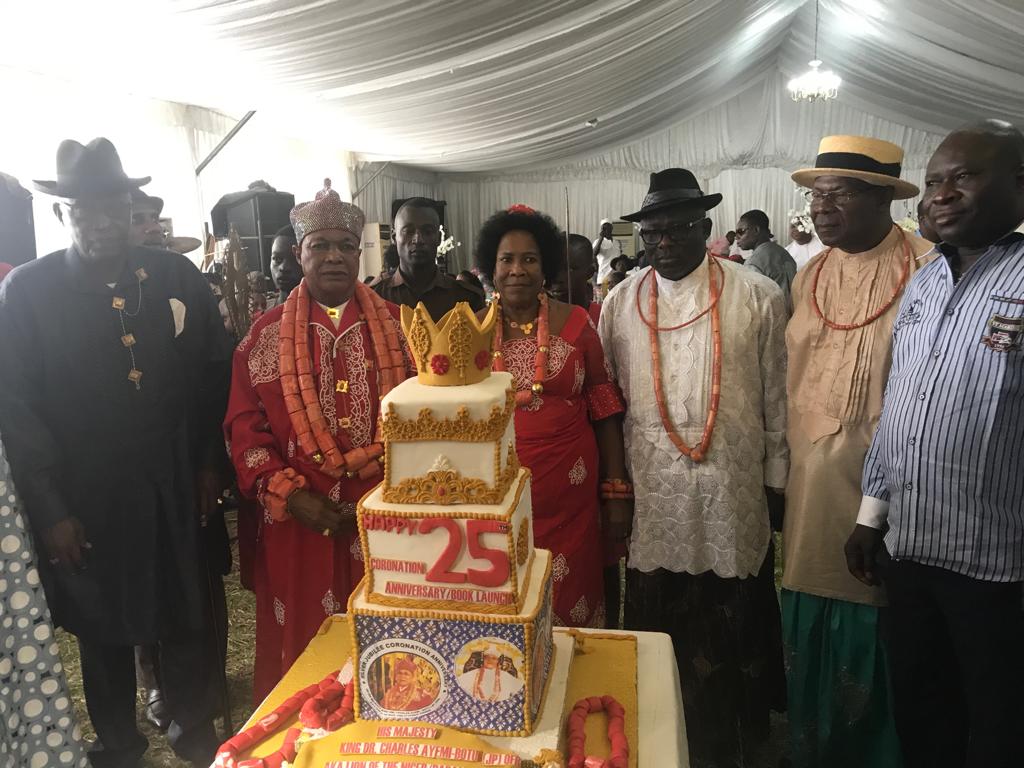 The State Governor, Senator Ifeanyi Okowa has attributed the peace being  enjoyed in the state to the roles played by  traditional rulers in their various kingdoms.

Governor Okowa stated this at Okpokunou in Burutu Local Government Area during the celebration of the Silver Jubilee coronation anniversary and book launch of the Paramount ruler of Seimbiri kingdom, King Charles Ayemi-Botu .

The Governor represented by the Speaker of the State House of Assembly, Rt Hon Sheriff Oborevwori said the Seimbiri monarch had played key roles in the peace and development of the area and commended the traditional institution for supporting his administration .

While congratulating the  Royal father on   his Silver Jubilee  coronation anniversary and launch of his biography, the Governor said  that his reign had witnessed  peace, development and progress to the kingdom and prayed God to grant him more peaceful reign on the throne of his fore fathers.

The Governor of Bayelsa State, Barr Seriake Dickson who congratulated the monarch on his Silver Jubilee  coronation anniversary on behalf of the government and people of Bayelsa state underscored the need for the unity of the ijaw nation.

He commended the  Monarch  for his service and leadership to his kingdom and the  ijaw nation stressing that  education was key to emancipation of the ijaws hence he has built two universities in Bayelsa State describing education as light.  .

The Bayelsa Governor commended  the Traditional ruler for documenting  his life in a book which future generation would read and commended Governor Ifeanyi Okowa and former Governor James Ibori for their development efforts in ijaw land and urged the ijaws to continue their support to the  Okowa administration.

Former Governor James Ibori represented by a former Commissioner of Finance, Chief Love Ojakovo said King Charles Ayemi-Botu contributed  to  the peace during the Warri crisis and was a strong advocate for the development of the Niger Delta and thanked God for Silver Jubilee  coronation anniversary.

The Paramount Ruler of Seimbiri Kingdom,King Charles Ayemi-Botu recalled when he was presented with staff of office by the then Military Administrator, Group Captain Ibrahim Kefas saying that the last twenty five years had witnessed tremendous development.

He commended Governor Ifeanyi Okowa for his development efforts in the kingdom and former Governor James Ibori for the construction of the Bomadi bridge which brought monumental development to  ijaw land as over eighty communities that were cut off from the state now had a sense of belonging.

He thanked the Seimbiri people for their support and commitment to the kingdom.

A former Minister of Police Affairs, Alaowei Broderick Bozimo said the reign of King Charles Ayemi-Botu has transformed the area as the kingdom had remained peaceful thereby attracting development and urged the people to support the monarch and the state government.

Reviewing the book, Barrister Akpo Mudiaga Odje said the book with twelve chapters is a well documented history of the monarch from his birth to the ascension to the throne and it will encourage the younger generation that hard work pays.

The event was attended by dignitaries from within and outside the state including representative of the State Chief Judge, Justice Marshall Umukoro, a retinue of traditional rulers led by the State  Chairman of the Traditional rulers council and Obi of Owa, Dr Emmanuel Edeizomor 11  among others .

The highlight of the ceremony was the cutting of the silver jubilee anniversary cake and the launch of the monarch’s biography titled the Lion of the Niger.