Okowa Explains His Administration’s Involvement in Development of Markets 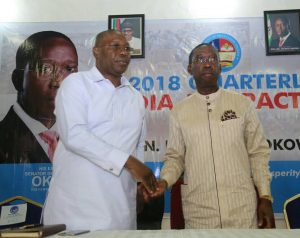 DELTA State Governor, Senator Dr Ifeanyi Okowa has explained why his administration was involved in the construction of markets despite the fact that it is the function of local government councils to do so, saying markets grow rural commerce.

The Governor at a quarterly interactive session with Journalists in Asaba on Wednesday, stated that his administration was committed to the over-all socio-economic development of the state and markets, especially in rural communities where such markets play vital roles in the development of the areas.

He said, “we are trying to assist our people through rural markets because that helps to grow commerce and the local government councils that are directly in charge of markets may not be very strong financially. If we continue to leave them it means we will be impacting very badly  on the economy of the state and in the course of this year, we are building markets, one of which is the Ozoro market which was just recently awarded. It was a promise made and it is a huge market. The other is the Oghara market, which was in very bad shape; we are also building the market in Burutu town and others.”

At the well-attended session, Governor Okowa lauded the synergy that exists between his government and the media, stating, “without that partnership (with the press), it will be difficult for the world to know exactly what we are doing as a state either in terms of projects or the challenges that we have in the course of this administration.”

He disclosed that the revenue to the state has greatly improved which led to the state not owing salaries of workers and also, complementing local government councils to offset backlog of salaries owed their staff.

“I know that when we spoke the last time, that we were anticipating things will gradually get better and I want to confirm to us that by the special grace of God in terms of receipts from Federal Accounts Allocation Committee (FAAC) allocation as it concerns the state, and by God’s grace a lot has been done in the course of time; it has been confirmed that at the end of December 2017, in terms of salaries, we have paid all our salaries at the state level up to date; we have even began as a state to give support to the local government councils to enable them pay their salaries more regularly and we are beginning to find ways to settle some of the backlog of salaries; we are committed to that and it is going to be a gradual process and we hope that the councils that owe will eventually be able to settle the backlog of salaries,” the Governor assured.