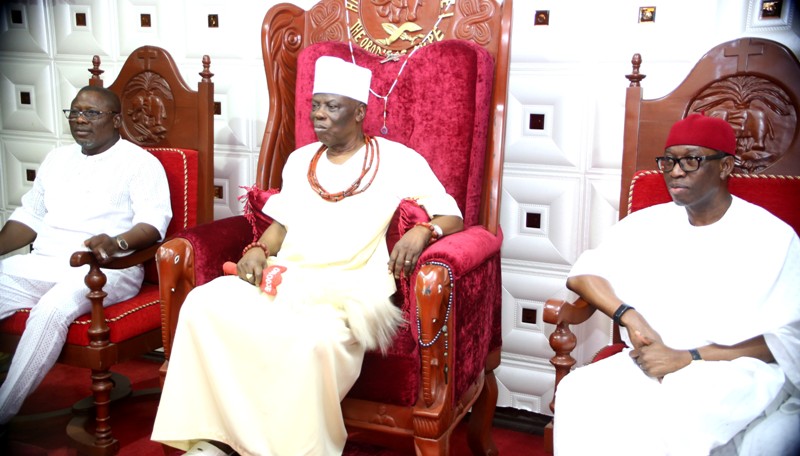 Delta Governor, Sen. (Dr) Ifeanyi Okowa, has commended the effort of traditional rulers in ensuring peace in the State.

Okowa gave the commendation on Sunday at the palace of the Orodje of Okpe kingdom, His Royal Majesty, Major General Felix Mujakperuo, Orhue I, in Orerokpe, Okpe local government area of the state.

The Governor who was on a condolence visit to the monarch for the loss of his elder sister, Mama Maread Asamaigor, said he specially thanked him for his leadership qualities in ensuring a peaceful kingdom, saying “I believe that if everyone was like you, we would have a very peaceful State at all times.

“We are actually beginning to see oneness in all of us, and its because of people like you who are in leadership positions.

“I believe that when we have a peaceful State, more development will come ,” the Governor said.

The Governor therefore condoled with the monarch on the death of his sister and prayed to God to comfort him, the entire family, and fill the gap created by her demise.

On his part, the Orodje thanked the Governor for coming to identify with him and his people at this time and described the Governor as “prince of Okpe kingdom “, adding that he was welcome anytime.

He noted that Okpe people were very happy with his administration hence their support for him.

The monarch used the forum to suggest the need for proper coordination and communication between the vigilantes in the State and security agencies in the common fight against insecurity in the State.

According to him, “when vigilantes are properly organised and with proper communication, they can help in providing security in the State”.

He further used the opportunity to appeal for either a federal or state established institution in the domain, saying such could also help in further development of the area.

He prayed for the Government and wished the State well as always.

The Governor was accompanied on the visit by Speaker of the Delta State House of Assembly, Hon. Sheriff Oborevwori, State Chairman of PDP Olorogun Kingsley  Esiso and other  top government Officials.