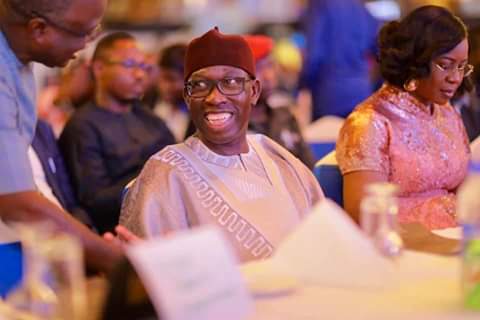 *** He Is A Man Of Unquestionable Integrity – Atiku

AMIDST fun-fair, Delta State Governor, Senator Dr Ifeanyi Okowa has added to his kitty, the “2018 Silverbird Man Of The Year Award”, which he dedicated to Deltans for their peaceful dispositions and cooperation with his administration

In a colourful ceremony held Sunday,  February  3, 2019  night at the Eko Hotel and Suites, Lagos, the governor was personally presented with the award by the Presidential candidate of the Peoples Democratic Party (PDP), Alhaji Atiku Abubakar.

Alhaji Abubakar at the ceremony, urged Nigerians to vote for him as President stating that he will empower the people, invest in education and create jobs for the teeming Nigerian youths.

The former Vice President congratulated Governor Okowa for the award, stating, “you have done very well for your state and our country; I have visited Delta State severally since you became Governor and I am amazed with the projects I have seen in Delta, I want to commend you, but, putting that one aside, my national chairman (National Chairman of the PDP, Prince Uche Secondus) is a product of one of the most credible primaries you (Governor Okowa) conducted and even the Presidential primaries which you conducted – based on your credibility, has been adjudged the most transparent and credible election in recent times, all the aspirants in the Presidential primaries accepted the result; when it comes to your (Goverrnor Okowa) personal integrity, nobody can question you.”

Governor Okowa at the occasion, said, “first, I must give thanks to God who gave me life and I want to thank all Deltans who supported me and made my administration to succeed; I knew the best politics is to connect with the people and through partnership with Deltans we are working, we are able to build the peace and today, Delta State is the highest in oil production because, our people are peaceful.”

“We are building roads, we are building schools, our health insurance policy is on but, beyond these, the greatest of them all is the peace we have achieved,” the governor who was accompanied to the award ceremony by his wife, Dame Edith stated, adding, “I want to appreciate Silverbird Group for this award and commend our people in Delta State, the legislature and the judiciary for the support which has made us to achieve results.”

He used the opportunity to call on the Independent National Electoral Commission (INEC) to organise a credible and acceptable general elections as such will make the country more united, peaceful, respected in the comity of nations and give a boost to the economy.

According to Governor Okowa, “what troubles us most are the challenges facing us as a nation; I believe that a stronger Nigeria will only be possible when we do things transparently and, it is my hope that as we move into the elections, we should do things right and make the elections count for us to have a stronger Nigeria; a Nigeria that will be restructured for healthy competitions among the states for a stronger nation to be achieved.”

Chairman of the occasion who is the President-General of Ohaneze Ndigbo, Chief John Nnia Nwodo, thanked Silverbird Group for organising the ceremony, noting that it has given Nigerians hope that their efforts towards building a better country would be recognised.

Chief Executive Officer of Silverbird Group, organisers of the award ceremony, Senator Ben Murray-Bruce described Governor Okowa as a thorough man who has made the world to know that credible elections can be organised in Nigeria through the transparent and credible organisation of the PDP convention of which he (Governor Okowa) was the Chairman of the organising committee.

“We must be just and fair to each other and always remember that when you are in position of authority or power, know that the position will not last forever but, the legacy will last forever,” he sai
Other award winners include, Governor Seriake Dickson of Bayelsa State (Extraordinary Achievement Award), Governor Kashim Shettima (Extraordinary Personality and Achievement Award), Genevieve Nnaji bagged Lifetime Achievement award with Bisi Olatilo, Omotola Jalade Ekeinde and Dr Joe Okei-Odumakin while Dr Abel Ubeku, Alhaji Maitama Sule and Dr Alex Ekwueme recieved Post-Humus awards. There were also award winners in the Heroes Awards category.
Congratulating the Governor on the award, the Speaker of Delta State House of Assembly, Rt Hon Sheriff Oborevwori who attended the event said that the  Governor deserved the award, describing him as a hard working Governor.