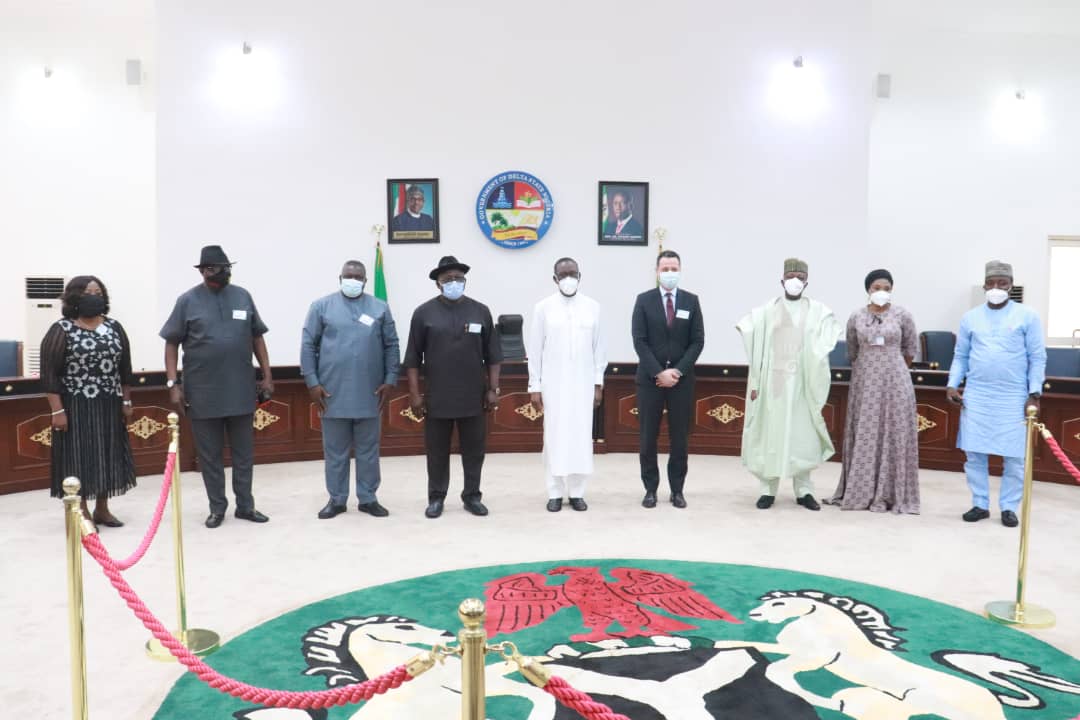 Delta Governor, Sen. (Dr) Ifeanyi Okowa, on Wednesday, attributed the security challenges inhibiting socio-economic development of the nation to a multiplicity of factors including high rate of poverty, unemployment and the geometrical increase in the population of the country.

Governor Okowa disclosed this while playing host to the Country’s Representative of Konrad Adenauer Stiftung (KAS), Mr. Vladimir Kreck and the Director General of the National Institute for Legislative and Democratic Studies (NILDS), Prof. Abubakar Suleiman who were in Government House, Asaba for a courtesy call.

He said that there was need to look at the totality of the governance approach to security reforms such that it is not just about security agencies, saying “many times we blame the security agencies rather than address the root causes of the challenges”.

According to him, the nation must address the critical issues concerning poverty and unemployment as well as the growing family size in the contemporary Nigerian society as a way of tackling the challenges of insecurity in the country.

While thanking the Country’s Representative of KAS for his promise to give support in the area of security sector reforms, the governor noted that the nation needed reforms in the security sector to mitigate its security challenges.

“The security situation in the country is as a result of multiplicity of challenges that we have; the unemployment situation is high, there is no doubt; the level of education is low; so when there is a lot of ignorance, the poverty rate is high and when you have a combination of all these, and more importantly is the fact that the population size is high.

“And when you have poverty combined with high population, you are running into a very big problem because you are giving room to families that would continue to breed more and more poverty.

“It creates a situation that the country would find very difficult to manage and that is exactly where we are heading to. So, it is important that we look into the entire foundation to ascertain where we have gone wrong.

“So as we address the reforms in terms of approach, information gathering and even going into modern architecture, we must address the issues concerning poverty and unemployment and the growing family size.

“Until we address the root cause of the security challenges which borders on poverty, unemployment and the growing family size, we may not be able to tackle security issues frontally.

“So, I pray that your assistance will help in one way or the other to help lighten the security burden that we have at the moment.

“With the cooperation of both national and sub-national government, I am sure that we would definitely be in a position to begin to carry out reforms that would gradually change the scenario as we see it as at today because it is not the best,” he added.

He applauded the National Institute for Legislative and Democratic Studies (NILDS) and Konrad Adenauer Stiftung (KAS) for their unwavering commitment towards building legislative capacity in the country.

“The legislature is an arm of government that we tend to play down on and unfortunately as a nation, for several years, we went through military rule and through those period, there was no room for the growth of legislative studies or growth of personnel in the performance of legislative duties.

“Even now that we have had a consistent democratic government in the last 20 years, there is still a lot of room for improvement and we thank God that you (KAS) have started partnering with the National Institute for Legislative and Democratic Studies (NILDS) to go round the states.

“I am proud of the Delta State House of Assembly because once you are eager to learn, the more effective and efficient you will be in delivering your duties and we do know that the legislature is very important in the running of a democratic government because of its checks and balances roles.

“It is not possible that the executive arm of government alone runs the totality of government otherwise, it will become a mini dictator within the governance structure. That is why it is actually very important that the legislature is able to stand strong and they can only stand strong when they are well informed.

“I want to appreciate you people for offering the services that you offer. I must also appreciate the NILDS because you have upped your games in trying to reach out to improve legislative capacity across the nation,” Governor Okowa said.

Earlier, the Country’s Representative of KAS, Mr. Vladimir Kreck who was accompanied by the Director General of NILDS, Prof. Abubakar Suleiman, told the governor that the mandate of the German Foundation was to support democracy and good governance, adding that they were in the state to promote capacity of the legislature through training workshop.

He therefore, commended Governor Okowa for his sustained support to the state legislature to build capacity through training since his administration came on board.