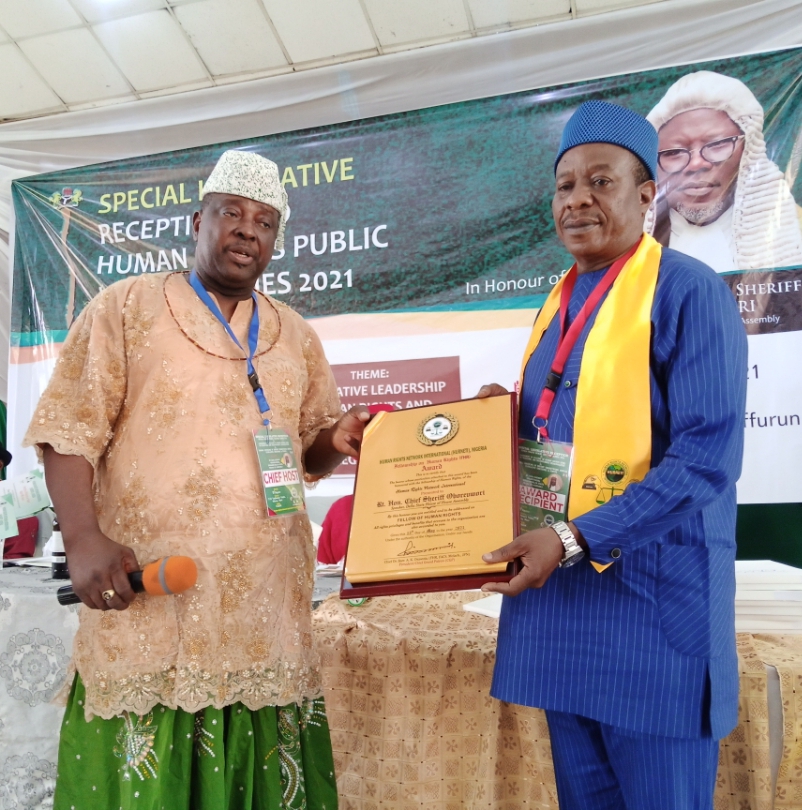 The Speaker of the Delta State House of Assembly, Rt Hon Sheriff Oborevwori has called on the Human Rights Network International (HURNETI) to partner with the State Assembly to make Delta a reference State in observing Human rights sanctity.

In his remarks on Saturday, May 15th, 2021, at the presentation of special award for Superlative Legislative Leadership for Good Governance to him by HURNETI at the Petroleum Training Institute (PTI), Effurun, the Speaker, expressed gratitude to HURNETI led by Chief (Dr) Barrister A. K. Asowata for the recognition.

The Speaker who was represented by the Deputy Chief Whip of the House, Hon Solomon Ighrakpata, thanked Almighty God for granting Barrister Asowata and his team the wisdom, courage and foresight in identifying, appreciating and recognizing efforts of those of them that were honoured in the ceremony.

Rt Hon Oborevwori said that ; ” I could not have imagined that a moment like this would come so soon, especially from the human rights community. When I contested for the House of Assembly seat for Okpe State Constituency in 2015 and won to the glory of God, I pledged to myself that I would dedicate my time and energy to the duties of a lawmaker which include but not limited to lawmaking, representation and oversight”.

According to him, as the Speaker of the Delta State House of Assembly, he has received a couple of awards, “But this particular award by Human Rights Network International is very dear to me for several reasons. The Legislature and Human Rights Groups have so much in common in terms of duties and functions that we owe humanity”.

The Delta State House of Assembly, he stated, is mindful of the critical place of Human rights in the society, adding that ; “As a House we have passed a number of Bills into law that promote and protect the rights of Deltans and everyone that resides in the state. For want of time, I will mention just a few : The Administration of Criminal Justice Law, the Child Rights Law, Office of the Public Defender Law and Violence Against Person’s Law”.

He said that besides these laws, there is a Special Committee established by the Standing Rules of the House known as the Public Petition Committee, saying that the Committee has mandate of the House to investigate Petitions from Deltans alleging breaches of their rights in the State.

The Speaker added that ; “The Legislature as an arm of government under my leadership is open and willing to work with Civil society organizations to continuously promote and protect the rights of Deltans. After all, the primary responsibility of Government is to provide welfare and security for our people”.

“On this note, I therefore call on your organization to partner with the State Assembly to make Delta a reference State in observing Human rights sanctity”, he stated.

The Speaker challenged Human Rights Network International to look inward, “because these awards should not only be bestowed on the elite and the privileged few in our society. For the common good of all of us, I want to urge you to identify that smart working, honest and dedicated driver, that market man or woman ; that messenger and cleaner in the office that does her job diligently should also be honoured”.

“These are ordinary people doing extra ordinary things. They also deserve to be honoured and recognized to serve as inspiration to others because the world is in need of good people”, the Speaker who was also awarded Fellowship of Human Rights (FHR), said.

The ceremony in which about Thirty-seven persons were honoured, including the Speaker of the Delta State House of Assembly, Rt Hon Sheriff Oborevwori, was chaired by Brig. Gen. Dominic Oneya (Rtd), who was represented by Olorogun Ochuko Sakpaide.