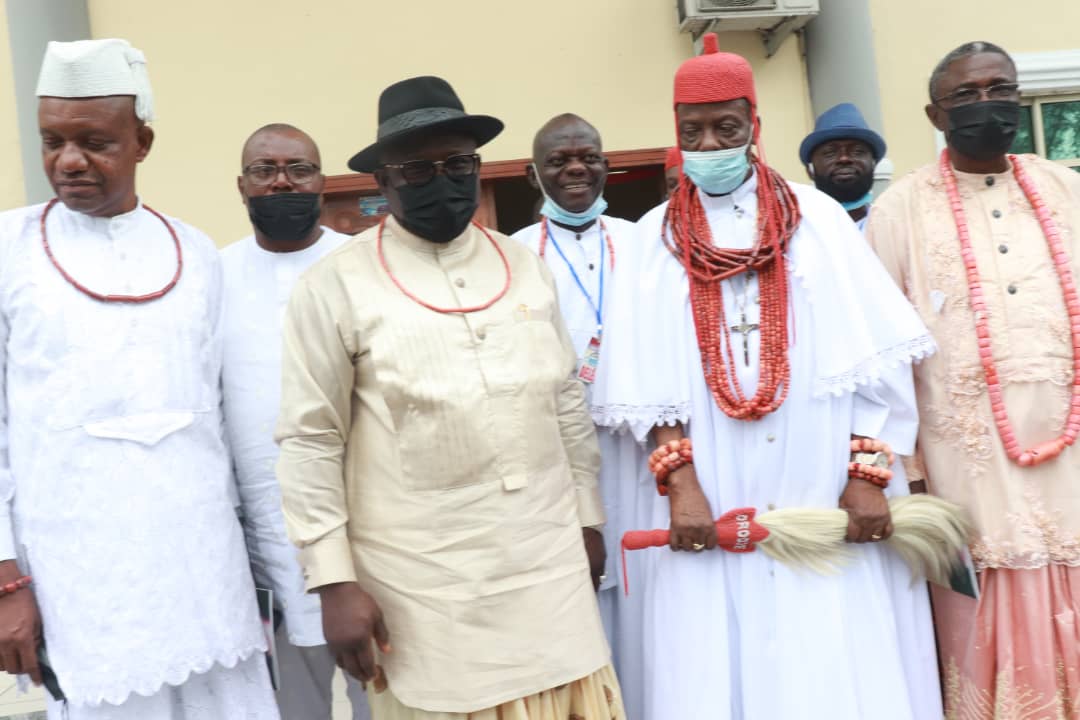 The Speaker of the Delta State House of Assembly, Rt Hon Sheriff Oborevwori has urged sons and daughters of Okpe Kingdom to maintain sustainable peace and attract rapid development to their homeland.

In his remarks on Saturday, April 24, 2021 at the Okpe Union General Conference/Convention, held in Orerokpe, Headquarters of Okpe Local Government Area of Delta State, the Speaker commended His Royal Majesty, Major General F.A. Mujakperuo mni, CFR, Rtd, Orhue 1, the Orodje of Okpe Kingdom, for his leadership styles, prayers and wise counsels, saying his reign has brought peace, tranquility and development to Okpe land.

“His Royal Majesty is indeed a blessing to the Okpe Kingdom. Our most revered monarch, is the custodian of the culture and tradition of the Okpe people. It therefore behoves on all of us to accord the throne the desirable maximum adoration and unalloyed respect. Even the holy Bible admonished us to honour our rulers and fathers”, he stated.

The Speaker who represents Okpe State Constituency in the Delta State House of Assembly also said that; “At this critical time of our history, we must intensify our support for our highly respected Royal Father and the Okpe Union. As a blessed kingdom with enormous human and material resources, I want us to pledge to ourselves that with love, unity and deliberate commitment, Okpe Kingdom will be first among equals”.

“It is not an accident that this Conference is holding in Orerokpe. Every socio-cultural organization has its roots firmly planted in their homeland. Okpe Union should not be an exception. Again, I wish to commend our royal father, Orhue 1, the Orodje of Okpe Kingdom, Ekakuro Okpe and leaders for this laudable initiative. The relocation of the Okpe Union headquarters to our ancestral home, Orerokpe, is a good omen that will continue to attract our people home”, the Speaker said.

He lauded the Interim Executive Committee, led by Professor G.E. Idolor for organising the conference and said that; “I appreciate Prof. Idolor and his team for dedicating their time, energy and resources in sustaining and driving the vision and goals of our founding fathers to an enviable height”.

“As we gather today to chart a better course for the Okpe Kingdom and its people, I want to also seize the opportunity to preach love, peace and unity amongst our people, because a house divided against itself cannot stand. Let us continue to rally around our revered King, the Orodje and our leaders to collectively move Okpe Kingdom to the next level”, Rt Hon Oborevwori said.

According to him, given its origin as one of the foremost unions in Nigeria, the Okpe Union was founded in 1930 and has evolved over the years, adding that; “For decades, the Okpe Union has undergone several positive transformations to the good of our people and to the glory of God”.

“Against this background, I want to encourage everyone of us to look at the possibilities ahead and the better days before us as a union to maintain sustainable peace and attract rapid development to our homeland. In any case, this is what we are known for. We are a Peace loving people, let us not depart from this noble virtue of ours, no matter the challenges confronting us”, he stated.