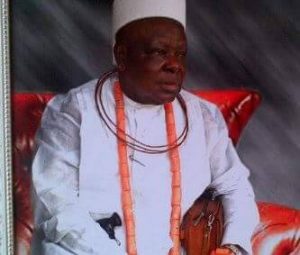 The Speaker of the Delta State House of Assembly, Rt Hon Sheriff Oborevwori has expressed sadness over the demise of Chief Williams Ibori, the Unugbrogodo of Ogharefe.

In a  Press Statement issued in Asaba on Thursday, July 12, 2018, by his Chief Press Secretary, Dennis Otu, the Speaker said he was short of words when he heard of the death of Chief Williams Ibori, describing him as a man of peace and a great mobilizer.

According to the Statement; “I was short of words when I heard of the  sudden death of a notable figure in Urhobo Nation, Chief Williams Ibori,  the news of his death actually   came to me as a rude shock and very hard to believe that he is no more with us.  It is so painful that he left us now that his wealth of experience is most needed”

Rt. Hon Oborevwori prayed  God to  grant the entire  Ibori family  the fortitude to bear the irreparable loss, adding that;  “I also pray God to grant the soul of Chief Williams Ibori  who was a rally point,  a great Mobilizer, man of peace  and lived a fulfilled and exemplary life eternal rest in His  bosom until we meet  to part no more”.