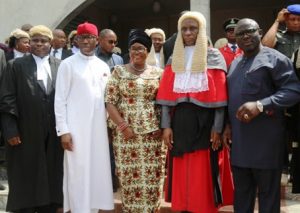 The Speaker of the Delta State House of Assembly, Rt Hon Sheriff Oborevwori has expressed sadness over the demise of Mrs Lizzy Umukoro, wife of the Chief Judge of the State, Justice Marshall Umukoro.

In a press statement by his Chief Press Secretary, Dennis Otu, the Speaker said he was devastated by the death of Mrs Umukoro, noting that she contributed significantly to the rise of her husband in the Judiciary.

He added that the late Mrs Lizzy Umukoro touched many lives positively and described her death as a great loss.

According to the Speaker; “The news of the death of Mrs Lizzy Umukoro, wife of the Chief Judge of the State came to me as a rude shock. She was a force to be reckoned with, a dedicated wife and loving mother. I cannot forget in a hurry the enviable role she played at the establishment of the Sickle Cell Clinic at the Orerokpe General Hospital by the wife of the State Governor and she did her best during the commissioning of the Sickle Cell Clinic. She was a great pillar and very reliable. We are going to miss her greatly”.

Rt. Hon. Oborevwori who described the deceased as a devout Christian, implored the family and others she left behind to take solace in the fact that she lived a fulfilled and worthy life.

” We are surely going to miss late Mrs Lizzy Umukoro, a devout Christian. She dedicated her lifetime to the service of God and humanity. Her death is very painful, coming at this time when we need her most. But we cannot question God why He called her now. I commiserate with His Lordship, the Chief Judge of Delta State, Justice Marshall Umukoro over the great loss of his lovely wife, Mrs Lizzy Umukoro”, the Speaker said.

He prayed Almighty God to give the family the fortitude to bear the irreparable loss and to grant repose to her gentle soul.