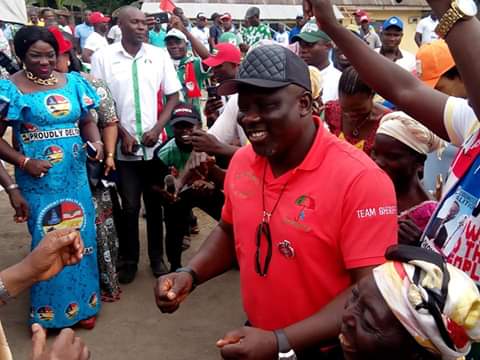 I have worked with leaders in the local, state, national and international level in the humanitarian, religious, civil, business and political arena.

And I can rightly say that Rt HON SHERIFF OBOREVWORI is one of the best leaders and representatives anyone can have. Okpe and Delta gets it right with him every time.

A vote for this humble, caring, giving and strategic leader is a vote for Better Life.

After just over one year as a member of the House of Assembly he was called upon to steer the Assembly to stability and progress. Before his emergence, the Assembly was in disarray.

Workers were angry because their outfit and other allowances were not paid. The Assembly was developing a bad reputation and acquiring poor rating.

With these and other issues hanging over the state legislature, it was necessary for something positive to happen.

Many didn’t expect much from the young Legislator. They doubted his ability to bring parity and stability to the State Assembly.

But lo and behold, he stepped into the office as though he was born to be the Speaker of the Assembly from day one.

He repaired the fractured relationship between the office of the Speaker and the Workers union, PASAN (Parliamentary Staff Association of Nigeria), and made sure they got every entitlement.

He stepped up the functionality of the legislature to another level completely so that people who doubted initially were compelled to become his fan.

He didn’t just stop there. He gave freely to his constituents and people who appealed for help. He set up a foundation and offered scholarship to lots of students.

He did all this humbly as he continues to work towards the success of the prosperity agenda of Gov Ifeanyi Okowa. He uses every opportunity to promote the agenda of the governor and government of Delta State.

Furthermore, he is a champion not just in the local arena, but in the nation too. His activeness and commitment to national legislature, earned him the Treasurer position in the EXCO of the Association of Speakers of the State Assembly in Nigeria.

This great leader, caring father, good husband and God-fearing man is ready to continue to serve his constituents.

I, therefore submit that there is no better man amongst us to carry on with this responsibility.

I urge all a sundry to do everything possible to make it the biggest victory ever, because he has earned it.

God bless Delta State and the Federal Republic of Nigeria.