Oborevwori Felicitates With Elumelu At 55 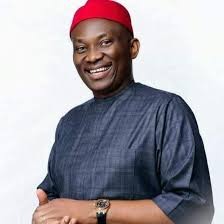 Oborevwori Felicitates With  Elumelu  At 55

The Speaker of the Delta State House of Assembly, Rt Hon Sheriff Oborevwori has congratulated the Minority Leader of the House of Representatives, Honourable  Ndudi Elumelu on his 55 years birthday anniversary.

In a statement by his Chief Press Secretary, Mr Dennis Otu, the Speaker extolled the qualities of the Federal lawmaker, saying he is a worthy representative of his people.

According to the statement; “My brother, I  join millions of others, including your constituents of Aniocha/ Oshimili Federal Constituency  in celebrating you at 55. As you celebrate,  it is my  prayer that God will continue to give you more grace to  carry on”.

” We are proud of what you are doing in the  National Assembly and  I want to implore you to continue to be  a force to be reckoned as the Minority Leader in the  House of Representatives”, he said.