OBOREVWORI APPEALS TO COMMISSIONER OF POLICE TO HALT ATTACKS BY HERDSMEN 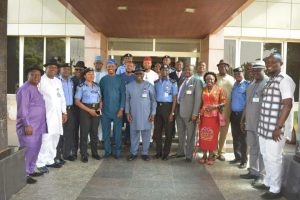 The Speaker of the Delta State House of Assembly, Rt Hon Sheriff Oborevwori has called on the State Commissioner of Police, CP Muhammed A. Mustafa to end attacks on farmers and other Deltans by Herdsmen.

Describing the unabated attacks by Herdsmen in the State as worrisome, the Speaker appealed to the Commissioner of Police to find lasting solution to the menace.

Speaker Oborevwori who spoke, Wednesday in Asaba, when the Police Boss paid him and members Courtesy Visit said that Deltans, especially Farmers were now living in constant fears as a result of attacks by Herdsmen.

“Our people are mainly farmers and our dynamic Governor has been doing everything to encourage people to go into farming. The Governor has created jobs for Deltans in the Agriculture Sector, but as I speak, most of the farmers are now scared of going to farm to avoid being killed by Herdsmen”, he said.

The Speaker, however commended the Commissioner of Police for his efforts so far in tackling the menace of the Herdsmen since he was posted to the State, but urged him to do more.

He specifically lauded the Commissioner of Police for his recent visit to Abraka, Ethiope East Local Government Area of the State after another attack by the Herdsmen

He said;” Our dear Commissioner of Police, I must commend the efforts that you have made so far to address clashes between our farmers and Herdsmen. I must praise you for the marching orders you gave to your men on this worrisome matter when you visited Abraka recently. You personally visited Mrs. Patience Akpomieme who was shot by the Herdsmen and was rushed to the Delta State University Teaching Hospital, Oghara and her husband, Mr Lucky Akpomiemie was brutally killed by the Herdsmen in his farmland. You held consultation with the traditional ruler in the area and strengthened the Vigilante groups by providing them with brand new Motorbikes, popularly known as Okada. You also redeployed about 30 Mobile Policemen. You have put a lot of efforts. The State Government is very happy with the way you are handling the situation. Halting attacks on our people will give hope to investors. We will support you to finish well as you have started very well”.

“You are fully on ground, you are very firm, upright and above all, very capable of finding lasting solution to the menace of the Herdsmen. You are trying your best, but I want you to do more. Delta State has been very peaceful until these attacks by Herdsmen on our people. You are on top of the situation already, but there is still much to be done .There is still room for improvement. All eyes are on you to end the attacks by Herdsmen”, he added.

Earlier, CP Muhammed Mustafa, called for unity in dealing with crime cases in the State and thanked members of the Delta State House of Assembly for assisting Police in the State.

According to him, kidnappings, Cultism, murders were given him great concern,saying that;”Let us come together and tackle criminal activities in the State. Let us be united in the fight against criminal elements. Murder has become a routine; people are being killed and we need to get to the root to find causes of rising crimes in the State. Our Lawmakers should critically look at our obsolete laws. Let us collaborate in curbing crimes in our Society”.