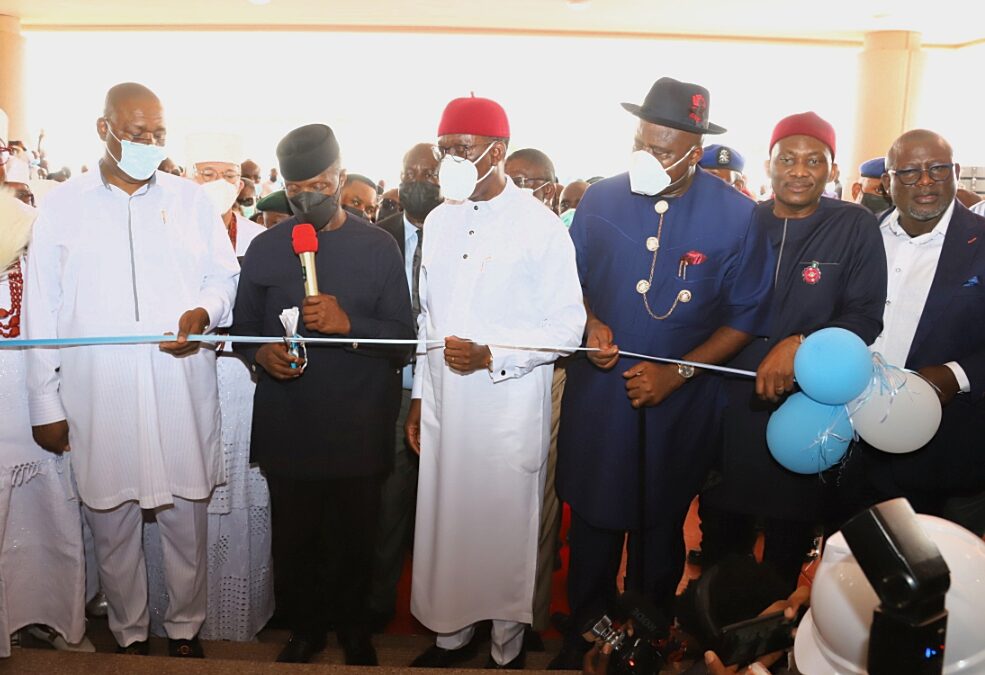 The Vice President, Prof. Yemi Osinbajo, on Monday said the new state-of-the-art Central Secretariat Complex built by Governor Ifeanyi Okowa in Asaba was one of the governor’s legacies of inspirational and visionary leadership in Delta State.

Osinbajo said this on Monday in Asaba while inaugurating the secretariat complex named after the Asagba of Asaba and Nigeria’s oldest professor, Obi Prof. Chike Edozien.

He said that the civil service building of any country or state was one of the major monuments, not just in the seat of power but also the splendour and the authority of the government.

He commended Governor Okowa for providing Deltans with such a historical building and monument, and said that the secretariat would provide the state’s workforce with a functional building and environment that would bring out the best in them.

Osinbajo said that the Asagba of Asaba deserved the honour for having led the community in the last 30 years on the throne of his forefathers.

“Thank you, Your Excellency, Governor Okowa for doing me the honour of sharing this historic occasion with you, the government and the people of Delta state.

“This is historic indeed because the seat of the civil service of any government, anywhere in the world, is usually one of the major monuments, enshrining not just the power but also the splendour of the authority of government.

“This imposing complex clearly meets these requirements. In due course, such buildings become historical monuments.

“The civil service and the people of Delta are today being presented with a state-of-the-art, functional and befitting secretariat complex after so many years. This in itself is worthy of great celebration,’’ he said.

He also stated that the other thing was that Delta “is at the same time immortalising the name of one of Delta State’s and indeed, Nigeria’s great and illustrious sons, His Royal Majesty, Professor Chike Edozien, the Asagba of Asaba.

“Professor Edozien is unarguably Nigeria’s oldest living professor in any discipline and an internationally-renowned Professor of Medicine. But more importantly, he is an outstanding bridge-builder and patriot, as your Excellency confirmed.

“His Majesty has played and continues to play an important role as a symbol of unity in this state, and during his 30 years reign, the town of Asaba has changed dramatically.

“His traditional leadership has ensured that the growth and increasing diversity of Asaba has proceeded without tension and antagonism amongst the people who live in the city.

“Your Excellency, I believe that in naming this building after His Royal Majesty, you are not just celebrating a highly respected and deserving son of Delta, but also signaling the sort of excellence in public service that we wish to see incubated within this building.

“More importantly, your are also saying to a generation that is not even old enough to be employed in the civil service today that integrity, diligence and service to community and country still pay.

“It is my hope that this place will like the eminent personage after whom it is named, and be a symbol of distinction and unity.”

Osinbajo commended Okowa for his dexterity in recognising the role of the civil service in building the edifice in spite of dwindling revenue receipts.

He remarked that the governor deserved commendation for giving the public servants in the state such magnificent edifice as secretariat “because in spite of dwindling revenue receipts and severe resource constraints across all levels of government in our country, you have been able to provide the funding for this project.

“Your recognition of the critical role of the public sector is notable because optimal public service delivery requires an efficient public service which will require a work space that is well equipped, conducive and inspirational.

“Public servants require an environment that brings out the best in them and this secretariat complex will provide such environment.

“I congratulate you once again my dear brother, Governor Okowa, for the successful completion of this very important project which is yet another demonstration of what you have shown over the years that with visionary leadership, state governments can do incredible things and this notably will be one of your most worthwhile legacies.”

In his address earlier, Governor Okowa commended the Vice President for coming to celebrate the landmark event with Deltans, and said that the vice president had aptly demonstrated that he was a true statesman and uncommon leader by always responding whenever the state called on him.

“The Government and good people of Delta State appreciate you today and always; we value your friendship, partnership, and genuine interest in the progress of our state.

“I stand here today feeling very proud of this legacy project. Indeed, I am filled with a great sense of joy, satisfaction, fulfilment, and triumph. It was an arduous journey from the time construction commenced on November 27, 2017, to this momentous occasion.

“As you would expect, constructing an edifice like this would task the ingenuity, resources and patience of any government in the times we live in.

“It was quite demanding and exacting, and there were times we were tempted to throw up our hands in despair, and even questioned the wisdom for embarking on a project of this magnitude.

“The turbulence that has plagued the economy since 2017 was worsened with the outbreak of the COVID-19 pandemic, causing major financial disruptions during the construction process.

“However, we persevered and weathered the storm, fully persuaded of the huge benefits accruable to the state once the structure was completed,” he said.

Okowa added that with the completion of the complex, the state would save hundreds of millions of naira spent annually in renting offices while the coordination and synergy among MDAs would be enhanced, leading to higher morale, better time management, efficiency and greater productivity.

“This sprawling office complex occupies a total floor space of 45, 000 square metres and designed around five clusters with multiple floors, each cluster around a courtyard.

“This concept allows plenty of natural light and ventilation into the offices. All the 27 ministries and their commissioners and permanent secretaries will be housed here, with the entire secretariat interconnected through a system of voice and data networks.

“There are nine seminar/conference rooms, a training room, clinic, creche, banking hall and three restaurants in the building, while the car park has the capacity to accommodate up to 1,000 cars. Electricity supply to the secretariat as with other government buildings is powered by the 8.5 Megawatts Asaba Independent Power Plant.

“As already announced by my humble self, this building is named ‘Professor Chike Edozien Secretariat’. Perhaps unknown to many, Professor Edozien, the Asagba of Asaba, is a notable scholar in the field of medicine.

“It is in recognition of his accomplishments in the medical profession and his disposition to peace-building and peaceful coexistence among the different ethnic nationalities of the state that we decided to name this secretariat in his honour,” he said

He commended the major contractor, North China Construction Nigeria Limited, the consultant architects and project managers, the supervising ministry, sub-contractors, suppliers and site workers for their focus and diligence while the project lasted.

“This project tasked their intellect and resourcefulness, and they certainly impressed with their discipline, creativity and never-say-die attitude.

“It is my earnest expectation that ministry staff will be motivated to put in their best while striving to keep this facility in excellent condition always.

“The narrative of poor maintenance culture that has bedeviled the civil service must give way to a sense-of-ownership, complemented by decency and responsibility.

“This is imperative for the integrity of the civil service establishment and the progress of the state and I expect the chief accounting officers of the various ministries to institute strict measures to encourage, enhance and enforce the culture of maintenance,” Okowa stated.

Welcoming guests earlier, Commissioner for Special Projects, Chief Henry Sakpra, said the project was conceptualised in 2016 by the Okowa-led administration to provide conducive working environment for the state’s public service.

He said actual work commenced in November, 2017 following completion of contract documentation by the state government and the contracting firm.