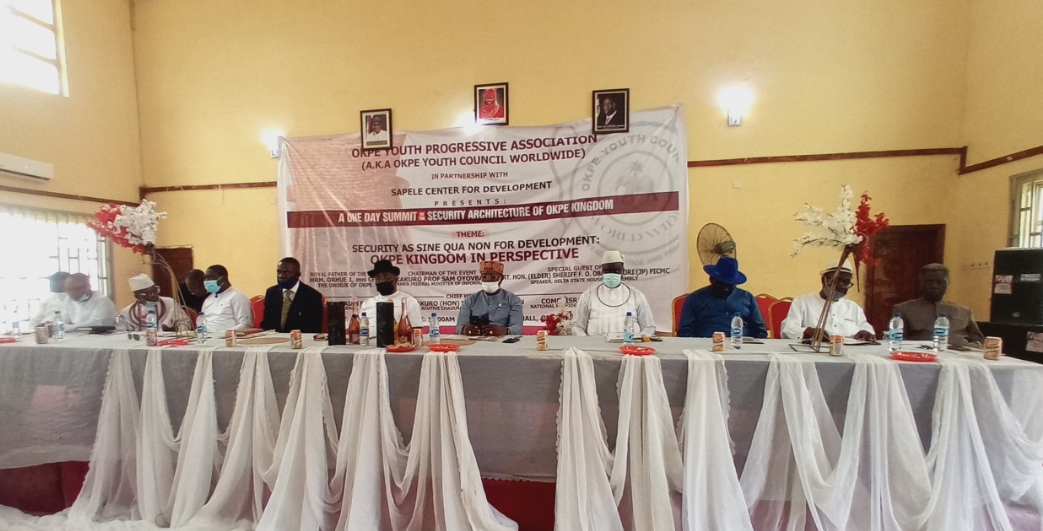 The Speaker of the Delta State House of Assembly, Rt Hon Sheriff Oborevwori has called on Okpe indigenes and residents to support security agents in the domain in achieving a secured and peaceful Okpe Kingdom.

In his remarks at a 1-Day Security Summit organised by the Okpe Youth Council in collaboration with the Centre for Development, Sapele on Monday 19th July, 2021 in Orerokpe, the Speaker who represents Okpe State Constituency in the State House of Assembly said that the rising spate of insecurity in the country was almost getting to its threshold in recent times and Okpe Kingdom was not insulated from the security challenges confronting the nation.

The Speaker who was represented by his Special Adviser, Chief Daniel Ivwighren stated that the rate of violent crimes in some parts of the Kingdom in recent times was becoming worrisome “hence this security summit is not only timely but also very important”.

According to him; “It is my hope that this summit will proffer solutions to some of the security challenges we have been facing.Though Okpe Kingdom is relatively peaceful compare to some others, we should not wait till the situation degenerates. Therefore, I must commend Okpe Youth Council and Centre for Development, Sapele for this laudable initiative of organising this security summit”.

“Essentially, the involvement of heads of security agencies domiciled in Okpe Kingdom in this project is an added advantage as it will strengthen partnership and intelligence sharing.Because security is everybody’s business, Okpe indigenes and residents must be prepared for a shift of mindset to support security agents in our domain in achieving a secured and peaceful Okpe Kingdom. For a peaceful kingdom attracts growth and development which in turn attracts investors and wealth creation”, he stated.

The Speaker added that; “As a state, one of our cardinal agenda is the security of lives and property. I assure you of my total support in securing our people. As we x-ray the security architecture of our kingdom today for security, peace and sustainable development, this security summit therefore, is a propelling and compelling factor”.

He expressed gratitude to the Okpe monarch, His Royal Majesty, Orhue 1, CFR mni, Orodje of Okpe Kingdom, for his abiding faith in the security summit.

“Let me also express my profound appreciation to Okakuro Prof Sam Oyovbaire for being part of this programme and for accepting to present a position paper on one of the topics listed for discussion. No doubt, his presence is a stamp of endorsement of the security summit”, the Speaker said.

He seized the opportunity to thank the Chief Hosts of the maiden edition of the Okpe Kingdom Security Summit, the Executive Chairman of Okpe Local Government Area, Hon Isaiah Esiovwa and his Sapele counterpart, Okakuro Eugene Inoaghan.

“I also want to specially salute the energetic and creative National President, Okpe Youth Council, Comrade Israel Otomewo and all the service commanders for coming to chart the path to a secured and peaceful Okpe Kingdom. I encourage all of us to seek and proffer workable security solutions for our kingdom now and after this summit”, he said.