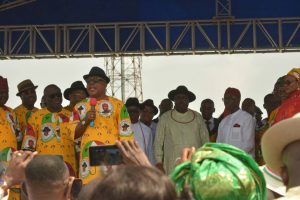 The leaders who spoke at Ovwor-Olomu in Ughelli South Local Government Area of Delta State during a grand reception in honour of Chief James Ibori described him as a unifying factor in the development of the Niger Delta region and Delta State in particular.

The PDP National Chairman, Prince Uche Secondus who eulogised Chief Ibori at the occasion said the PDP remains the only political party that can rescue Nigerians from the maladministration of the All Progressive Congress (APC).

“Ibori must be celebrated because he is a man of the people not just in Delta state but across the nation, today, he is a factor in this country. On behalf of the masses of our country, we salute you, we salute your courage because you are a man who believes in the struggle of the party”, he said.

Governor Ifeanyi Okowa said Chief Ibori laid the foundation of development in the state and established a political structure which served as a bridge builder and development agent across the country.

He thanked the people of the state for their support and called for greater unity among deltans and assured them of more democratic dividends.

Dr. Uduaghan on his part, called for an end to rumour mongering and sycophancy in the state

Responding, Chief Ibori advised the political class especially those seeking political office not to heat up the polity emphasising that power belongs to God and only he can give power.

He said that he has forgiven all who played one role or the other in his incarceration.

The chief host of the reception, Chief John Oguma said chief Ibori had impacted positively on the state and as a national leader stabilised the political terrain, adding that Governor Okowa had been endorsed for a second tenure in office.