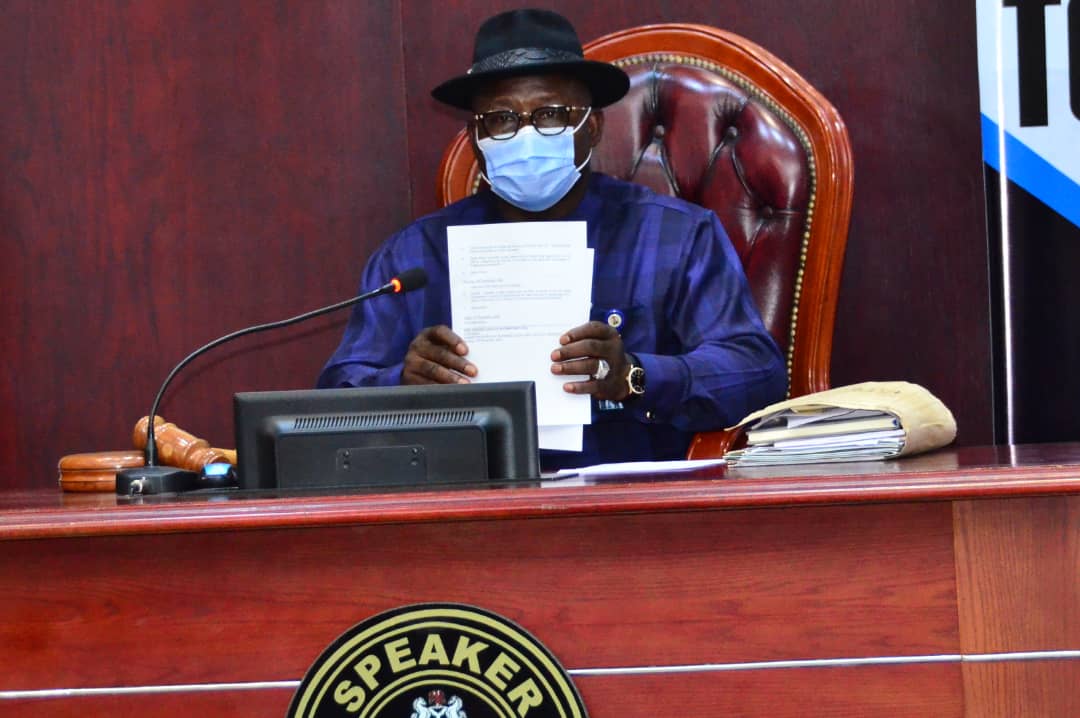 For the first time and in-line with established financial laws of the state, the Delta State House of Assembly on Tuesday adopted the report of its Committee on Public Accounts on the audited accounts of the State Government for the years ending 2016, 2017, and 2018.

The Auditor-General (State) had on 9th October 2019 forwarded to the State Legislature the audited reports for consideration and was referred to the Hon Anthony Elekeokwuri led Public Accounts Committee for necessary legislative actions.

Presenting the report at  Tuesday’s  plenary presided by the Speaker, Rt Hon Sheriff Oborevwori, the Committee Chairman, Hon Elekeokwuri observed the need for continuous audit of financial activities of Ministries, Departments and Agencies, MDAs of the State Government.

Part of the recommendations of the Committee as read out by Hon Elekeokwuri which was unanimously adopted by the House include the adoption of a revenue generation management template for MDAs as a means of ensuring realistic estimates during budget preparation.

Others were the mandatory constituting of audit committees by MDAs, and the timely submission of annual statutory reports by Heads of Boards and Parastatals to the office of the Auditor-General (State).

The House also mandated that monies accruable to the state government should only be withdrawn from the Consolidated Revenue Fund of the state, with exception to monies authorised by laws passed by the State House of Assembly.

Also recommended was the need for realistic revenue estimates/projections during preparation of annual budgets through the adoption of a revenue generation management template for MDAs.

It directed that subsequent years reports should be prepared taking into consideration all amended budgets including supplementary and re-ordered for the related period, disclosing that all excess expenditures identified to be over 10% of the budgetary provisions and other unappropriated expenditures reported against the MDAs for the period under review were critically attended to and cleared.

The House commended the state government for what it described as a display of character and capacity in the way and manner the financial affairs of the state were handled during the period under consideration.

The lawmakers noted that the reports of the Auditor-General showed an impressive budget performance in the 2017 and 2018 fiscal years despite the decline in revenue which slowed down the pace of progress in 2016.

Highlighting the shortcomings of the Auditor-General’s report for the year 2016, Hon Elekeokwuri listed improper record and book keeping, long outstanding statutory reports of Boards and Parastatals of government as well as excess and in-appropriated expenditure as major impediments.

He explained that the Committee had collected and studied related approved budgets along side other documents considered relevant, including Fiscal Strategy Paper, FSP, the Medium Term Expenditure Framework, MTEE and other extant regulations, in carrying out its assignment

Hon Elekeokwuri observed the existence of communication gap between the Office of the Auditor General and the MDAs as exposed by the absence of audit exit meetings at the end of every financial year.

The Public Accounts Committee Chairman also observed that several MDAs were yet to constitute ministerial Audit Committees as provided for in the Delta State Audit Law.

“My Speaker and distinguished colleagues, the order given to Public Accounts Committee on 9th October 2019 which is to do a review of the reports of the Auditor General (State) on the accounts of Delta State Government for the years ended 2016, 2017 and 2018 has been undertaken as mandated. In doing this, all known procedures were followed in the exercise of the assignment including public hearing. It is important to mention that all critical observations raised in the Audit Report and at public hearing were thoroughly acted upon and resolved”,  Elekeokwuri stated.

Continuing “there is no gainsaying that the state Government has shown character and capacity in the way and manner the financial affairs of the state were handled. Of commendation is the increased growth of the state internally generated revenue, IGR, coupled with the sound management of all revenue sources which has resulted to increased infrastructural growth across the state”.

Hon Elekeokwuri also made particular mention of the establishment of the Job and Wealth Creation Office, stating that the programme has trained and established a total of 5,074 youths in various vocational, agricultural and non agricultural enterprises.

The Committee recommended capacity building for revenue desk officers in all MDAs on revenue matters in the state and for officers assigned to the preparation of final accounts in all the MDAs.