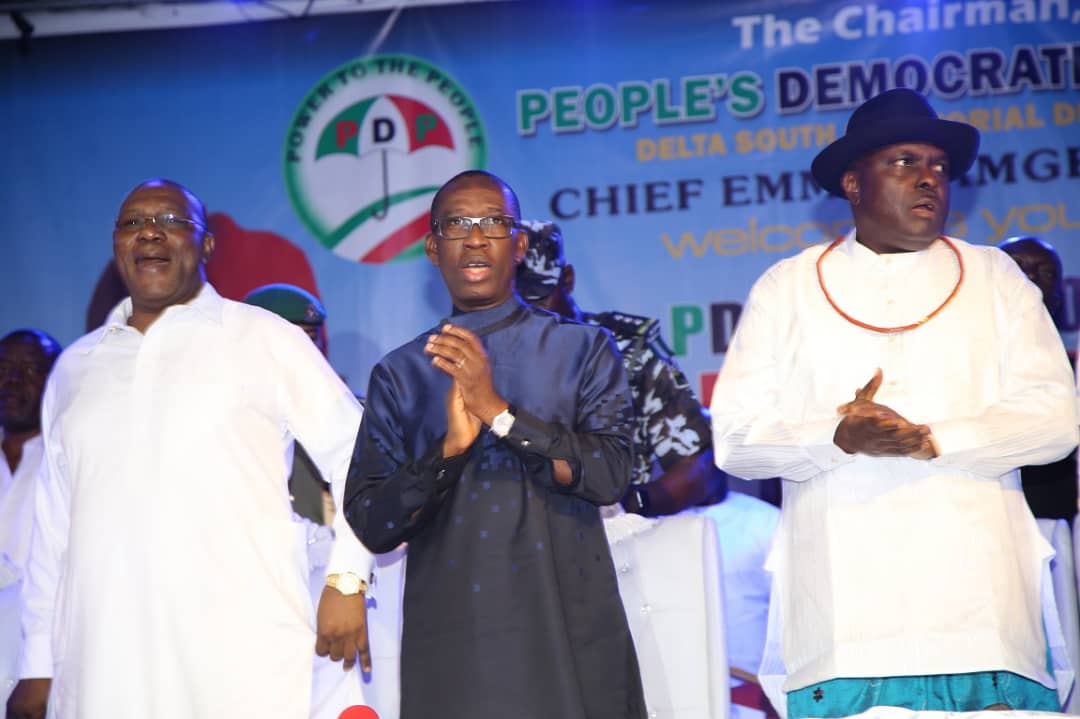 … Resolve To Deliver All PDP Candidates On March 9

DELTA State Governor, Senator Dr Ifeanyi Okowa, former Governor James Ibori and other political leaders of the Peoples Democratic Party (PDP) have resolved to work for all the candidates of the party to emerge victorious in the Govertnorship and State House of Assembly elections billed for March 9, 2019.

Governor Okowa at the meetings, said members of the PDP are true democrats as reflected in the votes cast across the state in the Presidential and National Assembly elections, stating that it was important for loose ends to be tightened for the remaining few Deltans who voted for the All Progressive Congress (APC) to cast their votes for the PDP candidates in the governorship and state assembly elections.

“I thank Deltans, especially, the people of Delta South Senatorial District for doing us proud in the last elections; I am confident that going forward, on the 9th of March, Delta South and all Deltans will give our party more votes; I am also confident that people will not be selective about who to vote for; all votes should be for the candidates of the PDP, as you cast your votes for me, also vote for the House of Assembly candidates, there should be no discrimination,” the governor said while addressing the people of Delta South Senatorial District.

He also, commended the people of Delta Central Senatorial District for voting for the PDP and urged them to increase the number of votes for the party in the March 9 elections.

According to him, “as you are going into the elections, the leaders of our party must be leading the people by remaining after casting their votes to monitor the elections and follow it up to ensure that our votes are protected.”

“The state government is the closest to the people and the government that impacts on you and we need to stay strong; as you are voting for the Governor, vote for members of House of Assembly, don’t be selective, it is not about the candidate, it is about us as members of one political party, the PDP; nobody will stop us because, God is with us; we love the peace that we have and we want things that are equitable as Deltans who believes in unity as members of one family; we should win in the 25 local government areas because, we have touched a lot of lives and there are many more lives to be touched,” Governor Okowa stated.

Chief Ibori had said at the meeting of Delta Central that, “we are here to reassure our Governor that the Urhobos are ready to vote for him on March 9; let us prove that we can vote massively for the Governor and candidates of the PDP on March 9.”

“Mobilise without inhibitions or reservation and deliver fully for the PDP because you did it very well for me and did it for Dr Uduaghan, so, we must do it for Governor Okowa to complete eight years as we did; our Ijaw brothers, you cannot say you don’t have a stake in this government, so, you must protect your stake; the PDP has done very well for the Ijaws, we have also done very well for the Itsekiris after all, we gave you people Governor and I commend our Isoko brothers, you have to do your best, you did very well in the last elections proving that politics is not all about money,” Chief Ibori said at the meeting of Delta South Senatorial District.

He continued, “I have said it time and time again that with what the PDP has put in place for the peace and unity of Delta State, Governor Okowa by the grace of God has done four years and God will keep him as Governor for another four years; I am not in opposition with anybody, what I am saying is that we should live in peace and unity and those of you in Delta South should give us the votes that we need to deliver the party.”

They all expressed the preparedness of the party to win in the governorship and state assembly elections.