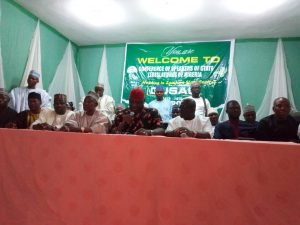 The Speaker of the Delta State House of Assembly, Rt Hon Sheriff Oborevwori has been appointed Caretaker Committee Member to conduct election for the new Executive Committee of Speakers of State Legislatures of Nigeria. Speaker Oborevwori is to represent South-South.

The Conference commended all major stakeholders in the ongoing Constitution amendment exercise for exhibiting a great spirit of patriotism in passing the alteration proposed by the National Assembly in a good time of the current administration and called on President Mohammadu Buhari to equally ensure speedy assent of the Bills.

The Conference commiserated with the people of Yobe State over the recent abduction of the 110 Dapchi Girls and the families of the victims.

The Conference appealed to relevant agencies to intensify efforts with a view of curbing the nefarious activities of criminally-minded people who have been terrorizing innocent people across the country.

It commended the Speaker of Zamfara State, Rt Hon Sanusi Garba Rikiji for hosting the first quarter general meeting of the Conference of Speakers of State Legislatures of Nigeria in the year 2018.