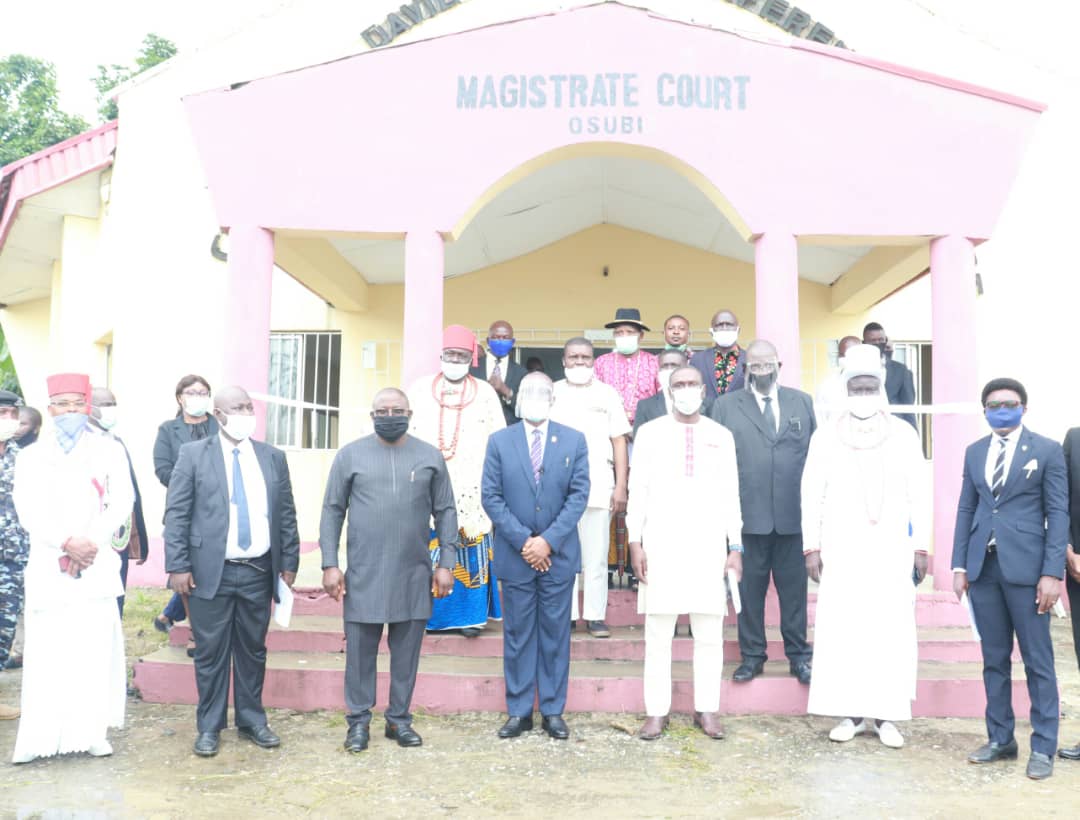 The Speaker of the Delta State House of Assembly, Rt Hon Sheriff Oborevwori has hailed  the establishment of Magistrate Court in Osubi,  Okpe Local Government Area of Delta State.

According to the Speaker, with the official opening of the Osubi Magistrate Court, residents of the area and environs do not have to travel far again to access justice through the courts.

In his words; ” Am very happy today for the opening of the Osubi Magistrate Court,  this is a welcome development and very good for all residents of Osubi and environs who do not need to travel far again to access justice through the courts”.

Rt.Hon Oborevwori  expressed gratitude to the state governor, Senator Dr Ifeanyi Okowa and the State Chief Judge for making the establishment of the Magistrate Court in the area possible.

The Delta State Chief Judge, Hon Justice Marshal Umukoro said in  his speech on the occasion of the official opening of the Magistrate Court, Osubi that; ” Before today, Osubi and the surrounding communities have been  under the Orerokpe Magisterial District sitting at Orerokpe. Residents of Osubi and environs who have need to access  justice  through the courts  had to travel to Orerokpe to do so”.

“The court being opened today has the advantage of preventing recourse to self help by aggrieved members of the public. The law frowns at self help. Therefore, I want to appeal that all persons that are aggrieved one way or the other should take advantage of the Judicial process to seek redress and not to have recourse to self help which is capable of causing breakdown of law and order”, he said.

The State Chief Judge cautioned pioneer members of staff of the Magistrate Court, Osubi to eschew corrupt tendencies that can cast aspersion on the image of the Judiciary, adding that; “Our  staff should maintain best ethical standards and benchmark global best practices in their service to the public”.

He commended the state governor, Senator Dr Ifeanyi Okowa for providing enabling environment for the Judicial Arm of government to thrive in the state.

“I also want to appreciate a worthy son of the community in the person of the Honourable Speaker of the Delta State House of Assembly, Rt Hon Sheriff Oborevwori for facilitating the establishment of the Magistrate Court being opened today. My thanks also go to members of the Executive Committee of the  Osubi Community for giving the needed support in ensuring that this day comes to a reality”, the  Chief  Judge said.