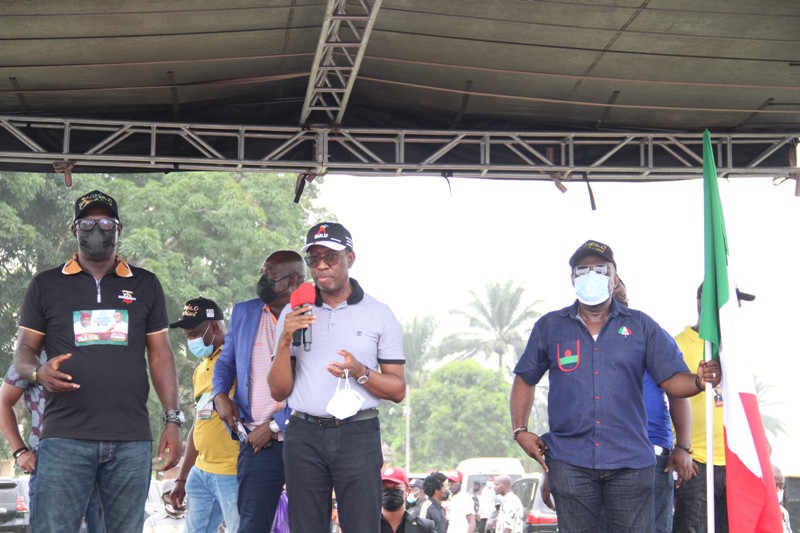 Delta Governor, Senator Dr Ifeanyi Okowa has said that the State Government is to establish a new secondary school at Otor-Iyede in Isoko North Local Government Area of the state.

Okowa who expressed surprise that the ward had no secondary school, called on the community to provide land for early establishment of the school, stressing that he would ensure that academic activities will commence in October, this year, in the newly approved secondary school.

At Emevor ward 7, he said his administration would construct the Emevor By-pass Road and the section A of the Emevor-Orogun Road project abandoned by the Niger Delta Development Commission (NDDC).

At Oghara-Iyede ward 2, he gave assurance that his administration was irrevocably committed to equitable distribution of amenities and sued for the usual cooperation of the people for accelerated transformation of the state.

“This is the first time that I am coming for a political rally at Otor-Iyede. Some times, it is good for a governor to be in the midst of his people (the people he is governing).

“Today, l am happy that l am here with my people. My happiest moment in politics is when l am with my people and l always enjoy being in their midst.

“I am surprised to hear that as big as Otor-Iyede ward 1 is, it does not have any secondary school which is not a good development at all.

“From now (April 1) to April 30, the people of Otor-Iyede should look for land for the establishment of a secondary school. The land should not be far from the people so that they could attend the school without having to trek very long distance.

“If the land is available, latest by the month of May, 2021, the construction of the school will start and the project will be given to a reputable contractor that will deliver the school latest by September ending.

“That new secondary school must start in October, this year by the special grace of God and that will be a miracle,” the governor said.

Welcoming decampees at Otor-Iyede ward 1 into the PDP, the state Chairman of the party, Olorogun Kingsley Esiso assured them that they would get all that is due them in the party, even as he called on the people of Isoko North to vote massively for the PDP candidate, Mr. Jude Ogbimi in the forthcoming by-election.

Olorogun Esiso who introduced the PDP candidate to the party faithful and their supporters in the three wards visited, said the achievements of Governor Okowa in the last six years made the campaign easier.

In their separate remarks, the Director General of the PDP Campaign Council, Hon. Oviemuno Oghoore and the Chairman of Isoko North chapter of the party, Prince Godwin Ogorugba commended members of the party and their supporters in the three wards for coming out in large number to welcome the governor and the campaign train.

The duo of Hon. Oghoore and Prince Ogorugba, however, urged them to translate their support for the PDP to massive votes for the party come April 10 when the by-election would be held.

Other leaders of the party in different wards including Dr. Paul Oweh, Dr. Nelson Ejakpovi, Arch. Joseph Ogeh, Chief Kome Okpobor and PDP ward chairmen pledged to mobilise eligible voters to vote for the party on the election day.

They affirmed that Isoko North was home for the PDP because of the good things that the party had attracted to the area since 1999 till date.