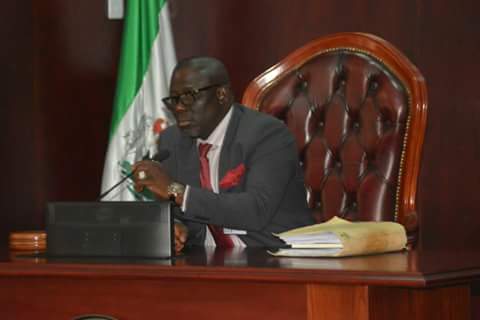 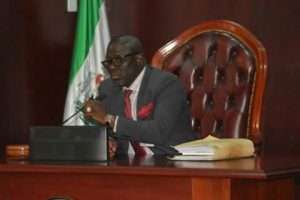 The State House of Assembly on Tuesday passed the Delta State Office of the Public Defender Bill, 2017 just as the Committee for the Celebration of the Third Anniversary of the Sixth Assembly has been set up.

The passage of the Bill at Tuesday’s plenary presided over by the Speaker, Rt Hon Sheriff Oborevwori followed a motion moved by the Majority Leader, Honourable Tim Owhefere seconded by Honourable Eriathake Ibori-Suenu and adopted.

At the committee of the Whole chaired by Speaker Oborevwori ,the report of the Committee on Rules, Business, Legal and Judicial Matters in the Delta State Office of the Public Defender Bill, 2017 was considered.

Members proposed various amendments on the report,some sailed through while others did not.

The Speaker while reporting progress on the Committee of the Whole said various clauses were amended following motions by some members  and thanked them for their contributions.

The Majority Leader, Honourable Owhefere moved for the third reading and passage of the Bill seconded by Hon Peter Uviejitobor and adopted.

The Bill is intended to provide legal representation for indigent persons through the Office of the Public Defender when created.

The Second Reading of the executive Bill which was read for the first time last week on the floor of the House followed a motion moved by the Majority Leader, Honourable Tim Owhefere and seconded by the Chief Whip Hon. Pat Ajudua.

Opening debate on the Bill, Hon. Tim Owhefere said the Bill seeks to prohibit and abolish unwarranted harassment of property developers in the state in the guise of collecting development levy popularly known as “deve”.

He said the tradition of collecting “deve” by youths had continued  in various communities steadily and had the tendency of driving away investors from the state.

The Majority Leader argued that Section 3 sub section 1 of the bill prohibits any forceful entry into any property with a view of denying the owner the ownership of such property while section 3 dealt on trespassers to properties which attracts seven years prison term with an option of fine of Five Hundred Thousand Naira (#500,000) or both .

Hon. Owhefere said it was worrisome that youths harrass  property developers from the point of purchase of land to the different stages of construction demanding various sums of money stressing that the proposed law would checkmate such illegal levies when passed.

The Lawmaker said section 6 prohibits anybody who  stations persons to stop  ongoing work on any construction site with a view of collecting levies is punishable under the proposed law while the Bill also made provision for community leadership and executive to protect properties within their domain among others.

The Majority Leader argued that the intention of the bill was to enhance development in the state without any form of harassment to the developer.

Also speaking in favour of the Bill, the Chief Whip and Member representing Oshimili North Constituency, Hon. Pat Ajudua said the Bill was people oriented and would fast track practical development in the state

She decried the situation where youths have turned themselves into anti development in the name of collecting illegal development levies from genuine developers.

The lawmaker argued that the Bill when passed would create an environment of peace for developers to thrive while it would also put the legal framework in place to checkmate negative tendencies of youths toward making request for payment of levies from developers.

Speaking against the Bill, the member representing Ughelli South Constituency, Hon. Reuben Izeze said the Bill violated all known law making precedence in the House as the House already had a Bill with the same content.

The Speaker explained that the Majority Leader had already sort leave of the House as order 12 Rule 87 of the House rules had earlier been suspended to enable the House take the second reading of the Bill.

The Speaker thereafter set up a eight man ad-hoc  committee to analyse the two other bills already before the House that had similarity with the Delta State Public and Private Properties Protection Bill.

The ad-hoc is expected to submit it’s report on Thursday this week.

In a similar development, the House has set up a four man committee for the celebration of the Third Anniversary of the Sixth Assembly .

The Committee is Chaired by Honourable Evance Ivwurie with Honourables Shola Daibo and Anthony Elekeokwuri as members while the Clerk of the House will serve as Secretary.

The House deferred the  screening of   Mr Anthony Obuh and Mr Lawson Efenudu  for appointment as Chairman and Secretary of the Delta State Bureau of Pensions to next week Tuesday .