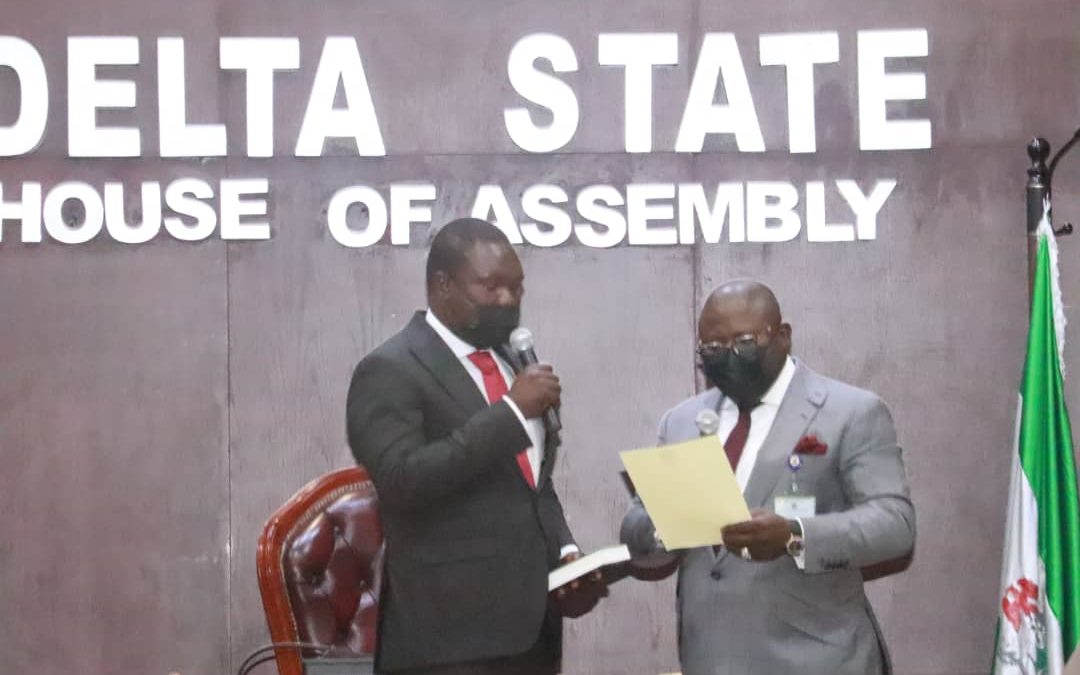 The winner of the September 11, 2021 by election for Isoko South 1 State Constituency, Hon Ovuakpoye Evivie in the Delta State House of Assembly, has been sworn in.

The oath of office and oath of allegiance were administered to Hon Evivie by the Speaker, Rt Hon Sheriff Oborevwori upon the resumption of plenary, on Tuesday, September 21st, 2021 after one month annual recess of the House.

Hon Evivie Ovuakpoye was the candidate of the Peoples Democratic Party, (PDP) in the September 11th, 2021, by-election and was declared the winner by the Independent National Electoral Commission, INEC, having scored 6,957 votes to beat other candidates in the electoral contest.

He took the relevant paths of office in line with the constitution of federal republic of Nigeria and the rule of the State Legislature.

The Speaker congratulated the new Lawmaker for his election and subsequent swearing in and urged him to brass up to the task before him.

Hon Evivie was immediately introduced to the members of the house by the Majority Leader, Hon Ferguson Onwo and later assigned a seat.

In his reaction, the new Isoko South One Constituency Lawmaker, assured his constituents of quality representation.

Hon Evivie paid glowing tributes to those that made his election possible, promising not to betray the confidence reposed on him.

In a related development, the leadership of the Peoples Democratic Party, PDP, on Tuesday, September 21st, 2021, forwarded the name of Hon Ferguson Onwo, representing Isoko South 2 Constituency as the new Majority Leader of the House.

The correspondence to the house conveying the name of Hon Onwo as the Majority Leader and signed by the State Chairman of the party, Chief Kingsley Esiso was read at plenary by the Speaker, Rt Hon Sheriff Oborevwori who congratulated him for the elevation to the number three position in the leadership of the House.

Also at Tuesday’s plenary, the Delta State Livestock Breeding, Rearing and Marketing Regulation Bill was read the third time and passed by the State House of Assembly.

The passage of the bill was moved by the Majority Leader, Hon Ferguson Onwo and adopted, after the suspension of the relevant rules of the House to enable it to be read the third time and passed.

The Chief Whip and Chairman, House Committee on Special Bills, Hon Pat Ajudua had presented the report of the joint House Committees on Special Bill and Agriculture and Natural Resources on the bill, were she stated that relevant stakeholders made good inputs on the making of the proposed law.

Also at plenary, the report on a bill for a law to establish the Delta State Regulation of Community Development Association was submitted by t Hon Ferguson Onwo led joint Committee on Housing, Women Development and Peace and Security.

The consideration of the report by the House Committee of Whole has been slated for 6th October 2021.