Delta Speaker, Oborevwori Felicitates With Obi Of Owa Kingdom At 84 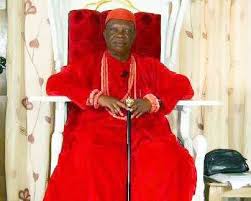 The Speaker of the Delta State House of Assembly and National Deputy Chairman of the Conference of Speakers of state legislatures of Nigeria , Rt. Hon. Sheriff Oborevwori has congratulated His Royal Majesty Dr. Emmanuel Efeizomor 11, Obi of Owa Kingdom on his 84th birthday anniversary.

The Speaker eulogised His Majesty, former Chairman of Delta State Traditional Rulers Council as a symbol of wisdom and infinite insight.

In a statement by his Chief Press Secretary, Mr. Dennis Otu, the Speaker affirmed that as a foremost traditional ruler the monarch epitomises wisdom and selflessness.

According to him: ” Your reign over the decades is deeply rooted in divine wisdom and insight, which has translated into peace and rapid development of the Owa Kingdom. Your dedication to the growth and well being of your subjects is so profound. Your support for the government in promoting peace, unity and progress is also very remarkable”.

The Speaker applauded Efeizomor 11 for consistently upholding the custom and tradtion of his kingdom, which includes hardwork, honesty and humility and prayed for divine health and longer life for His Majesty and wished him many happy returns at 84.