Delta Speaker, Oborevwori Congratulates Orodje of Okpe Kingdom On His Election As Chairman Of TROMPCON 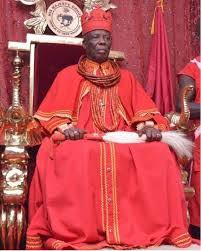 The Speaker of the Delta State House of Assembly, Rt Hon Sheriff Oborevwori has congratulated the Orodje of Okpe, HRM (Maj. Gen.) Felix A. Mujakperuo, Rtd, Orhue 1, CFR, mni, on his emergence as the National Chairman of the Association of Traditional Rulers of Oil Mineral Producing Communities of Nigeria (TROMPCON).

The Okpe monarch was elected National Chairman of TROMPCON on Wednesday, May 26, 2021 in Asaba, at the end of the 27th National Conference of the Association.

In a Press Statement by his Chief Press Secretary, Mr Dennis Otu, the Speaker described the election of the Okpe royal father to lead TROMPCON as a welcome development.

The Speaker who represents Okpe State Constituency in the Delta State House of Assembly said that the election of the new TROMPCON Chairman did not come to him as a surprise.

According to the Statement; “I wish to congratulate the Orodje of Okpe Kingdom on his election as the Chairman of TROMPCON, his election is a welcome development and I know that he will bring his wealth of experience to bear in his new office”.

The Speaker who is also the National Deputy Chairman of the Conference of Speakers of state legislatures of Nigeria added that; “I know very well that our highly respected royal father will give TROMPCON a purposeful leadership to the admiration of all and sundry”.