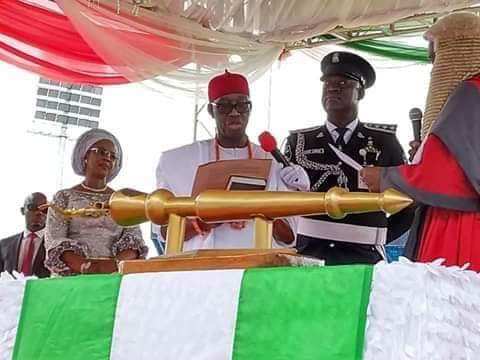 *** Calls On Deltans  To Support  The Governor  As Never  Before

*** Expresses  Hope  Governor Will Leave State  Better  Than  He Met It

The Speaker of the Delta State House of Assembly, Rt Hon Sheriff Oborevwori on Wednesday,  May 29, 2019, congratulated the State Governor, Senator Dr Ifeanyi Okowa on his swearing-in for second term, with a call on Deltans to give the Governor   the needed  support.

In a Press Statement by his Chief Press Secretary, Mr Dennis Otu, the Speaker expressed the hope that the Governor will leave the state better than he met it and prayed God    to grant him  the Wisdom of King Solomon to pilot the affairs of the state to the admiration of all Deltans.

According to the Statement; “With joy in my heart, I wish to felicitate with our dynamic and amiable Governor,  His Excellency, Senator Dr Ifeanyi Okowa  on his successful swearing-in today for second term. May God give him  good health and grant him  the Wisdom of King  Solomon to lead our dear State to the Promised Land”.

While saying that people of the state   made no  mistake in the  re-election of the Governor, the Speaker called on Deltans to give the Governor the needed support so as to move the   State to greater heights and leave a stronger Delta  state at the end of his tenure.

“With the successful swearing-in today of our hard working Governor, it is my prayer that God should give him the strength to continue to do his best for the state. I am using this opportunity to call on all  Deltans to give the Governor massive support to make our state the  envy of others  at the end of his tenure. The Governor cannot do it all  alone and so we should all rally round him for the betterment of our people and dear state”, the Speaker said.