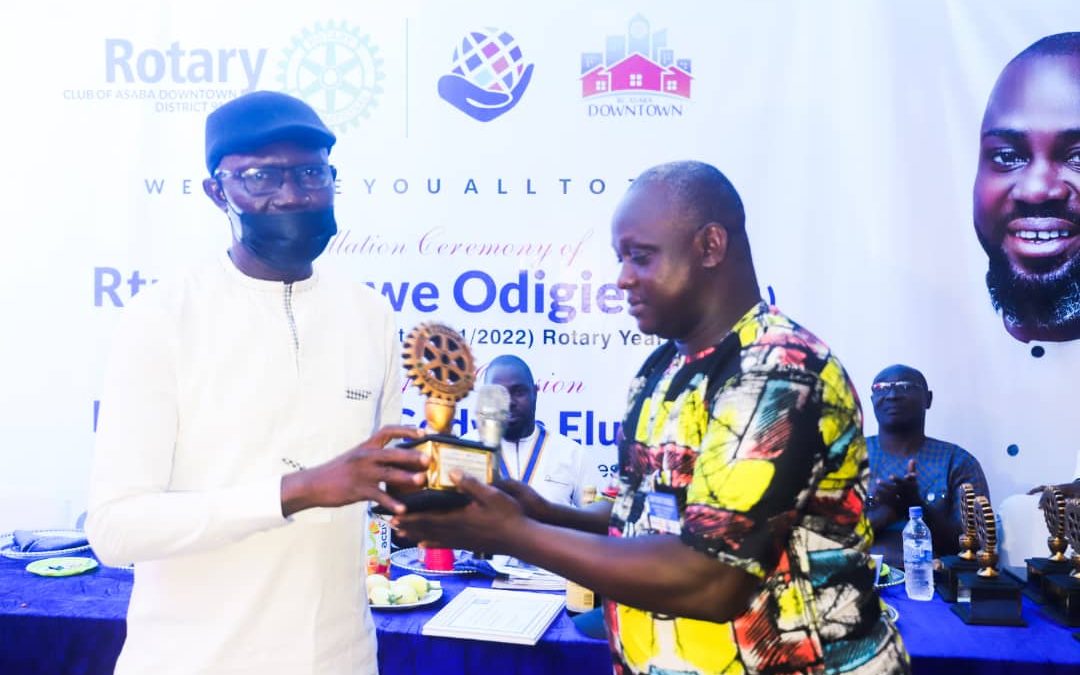 The Speaker of the Delta State House of Assembly, Rt Hon Sheriff Oborevwori has bagged the Leadership Service Award of Rotary Club of Asaba Downtown.

The award was presented to the Speaker, Rt Hon Oborevwori who is also the National Deputy Chairman of the Conference of Speakers of state legislatures of Nigeria at the installation ceremony of Rtn. Odinigwe Odigie (PHF+1), as the 2nd President of Rotary Club of Asaba District Downtown for 2021/2022 Rotary Year Rotary ( District 9141) Saturday, 11th September, 2021 at Orchid Hotel, Asaba, Delta State.

The Chairman Installation Committee, Rtn. Nnamdi Honnah said that; “This special award is an initiative of Rotary Club of Asaba Downtown aimed at recognizing outstanding achievements among distinguished personalities who have contributed immensely to Education, Community, Socio-Political and have stood and supported Peace and Unity”.

“We are very much aware that over the years, you have been in the forefront in Leadership endeavours hence this presentation of the Leadership Service Award to you”, he said.

He added that; “As you may be aware, Rotary is an international organization of professionals who provided humanitarian services, encourage high ethical standards in all vocations and help build peace and light up the world. Rotary is base on core values, services, fellowship, diversity, integrity and leadership. These are the values we live by and the values we strive to bring to communities we serve”.

In a brief remarks after he was presented with the award at the Colourful ceremony, the Speaker commended Rotary International for the honour done him.

The Speaker who was represented by his Chief Press Secretary (CPS), Mr Dennis Otu said that he was humbled by the Leadership Service Award.

According to him; “This Leadership Service Award is inspiring. Am humbled by this award. It will interest you to know that I would have been here today to personally receive this award, but I am far away undergoing Advanced Leadership Programme aimed at serving our people better”.

“Thanks for this recognition. Thanks for this wonderful honour. It is highly appreciated. I never knew that my efforts to the society are being noted and monitored for a day of honour like this”, he said.

Rt Hon Oborevwori added that; “This Leadership Service Award which I am dedicating to God and humanity will encourage me to do more for our people because to whom much is given, much is expected. Certainly, today is not for long speeches and so once again, thanks and God bless all you in Rotary Club of Asaba Downtown for this great Leadership Service Award”.

In his acceptance speech, the newly installed President, Rtn Odinigwe Odigie harped on the need to help the needy in the society, saying that; “Let us all leave here ready to make their lives better in a way that we can. As Rotarians, it will not be good enough to give only what we have left over or what we can spare, but we must truly give of ourselves with vigor in support of the ideals of Rotary”.

The Chairman of the occasion, Rt Hon Ndudi Elumelu, Minority leader of the House of Representatives, Congratulated the newly installed President and wished him a successful tenure.

He commended the sacrifices and selflessness of Rotarians for committing their resources, intellect, skills, energy and conn towards the overall good of others.

He urged Nigerians to vote out APC in the next general elections, saying that the Party has brought escalated mass killings, mindless bloodletting, terrorism, banditary, infrastructural decay, acute poverty, excruciating economic hardship while foisting a siege mentality and utter hopelessness on the nation.