DELTA LG POLLS: DELTA STATE APC NEVER PREPARED FOR ELECTION —- DESPSOMET………..Says, Anyone Who Want To Pass An Exam, Must Read His/Her Book *****Condenm The Electoral Violence Sponsored By The APC 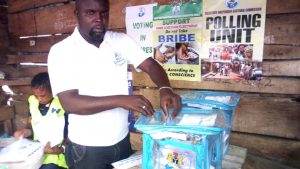 The Members and Executive of Delta State PDP Social Media Team DESPSOMET has strongly condemned the Electoral violence sponsored by the Delta State All Progressives Congress APC which resulted in raising down of the DESIEC office at Ughelli North Local Government Area of Delta State.

The DESPSOMET Coordinator Comr Edwin Afejuku who disclosed this yesterday at Warri South LGA said the Delta State All Progressives Congress APC has no right to frown at the credible election conducted by the Delta State Independent Electoral Commission (DESIEC), he describe the APC as a candidate who wants to write an Examination but refuse to Study his/her books ” APC didn’t Campaign yet they wants to win an Election, they have nothing to tell the Electorates ” he added.

While revealing that the Delta State APC was never Prepared for the Local Government Council Election, he Commended the Delta State Independent Electoral Commission for their Commitment in conducting a free and fair Local Government Council Elections as he called on the security agencies to get hold of those APC that Spearhead the Electoral violence.