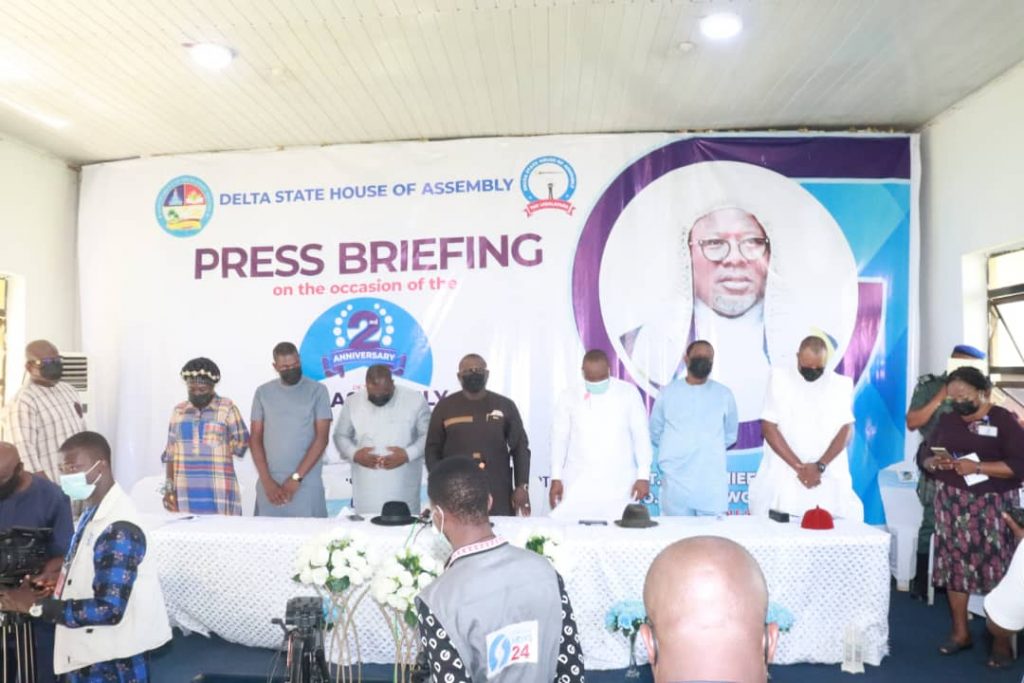 The Delta State House of Assembly has reaffirmed its commitments towards the promotion of Democratic tenets, the rule of law and the supremacy of the constitution of the Federal Republic of Nigeria (1999) as altered.

Speaker of the House, Rt. Hon. Sheriff Oborevwori who made the State legislature’s position known on Thursday, June 10th, 2021 in Asaba, the State capital during a media briefing to commemorate the second anniversary of the Seventh Assembly assured Deltans that Lawmakers in the State are irrevocably committed in driving the needed positive change in the State.

The Speaker, while giving the score card of the House in the second session of the seventh Assembly which ended on Thursday, June 10th, 2021, noted that within the past one year, a total of 14 Bills and 34 motions were received by the House.

He noted that out of the 14 Bills, Nine have been passed while eight have so far been assented to by the State Governor, Senator Dr Ifeanyi Okowa, adding that Five are still undergoing legislative consideration by the House.

He said, “it is heartwarming to note that we are making steady progress every other day. We started on a good note and I have no doubt in my mind that by the special grace of God we are going to finish strong”.

He also said that; “You would recall that in my last media briefing, I gave a report of the First Session of the 7th Assembly, which I christened: “Work in progress”. Today, I tagged this presentation: “Sailing Smoothly”. Last year, we shared our success story of the 7th Assembly with you and as expected, that narrative has attracted more responsibilities to the 7th Assembly to live up to new standards”.

“We have not relented in making sure that we will continue to drive positive change and remain committed to the promotion of democratic tenets, the rule of law and the supremacy of the Constitution of the Federal Republic of Nigeria, 1999 (as altered)”, he stated.

“Today, I wish to present the Legislative Achievements of the House for the period under review: June 2020 – June 2021:

“Within the period, a total of Fourteen Bills and thirty-four Motions were received by the House. Nine were Executive Bills, while five were Private Member Bills.

“Out of the fourteen Bills, nine have been passed and eight were given assent by the Governor. The remaining five Bills are still undergoing legislative consideration in the House.

“One remarkable feat among the Bills passed and assented to, is the passage and establishment of the three new Universities in the State. This is to cater for our qualified teaming youths that wished to further their education to tertiary level but were not getting admissions due to limited admission spaces” Rt Hon Oborevwori said.

Speaking further at the media briefing held at the Legislative Quarters Chapel, the Speaker commended the State Governor, Senator Dr Ifeanyi Okowa for what he described as the Governor’s unwavering commitments and adherance to the principles of seperation of power which, according to him has been the Major reason behind the peaceful collaboration between the State Executive and other arms of Government.