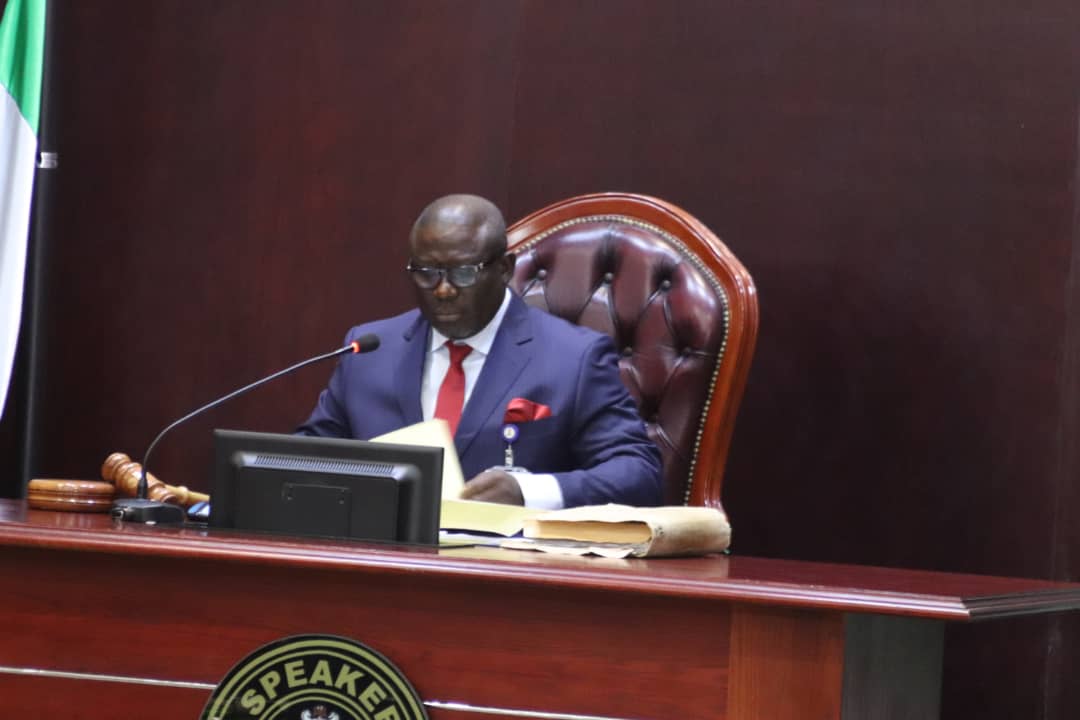 The Delta  State House of Assembly resumed plenary on Tuesday, February 5, 2019  after adjourning on December 20, 2018 for the Christmas and new year festivities.

At plenary presided over by the Speaker, Rt Hon   Sheriff Oborevwori,   the  House approved two requests from the State Governor, Senator Dr  Ifeanyi Okowa on the construction of the Beneku/ Kwale bridge and approach roads in Ndokwa West and Ndokwa East and the construction of 5.085  kilometers network of paved road in Warri, the  Commercial nerve centre of the state.

On the construction of the Beneku/ Kwale bridge and approach roads in Ndokwa West and Ndokwa East,  the Governor in a request to the House through a letter said there was need to construct a bridge across the Ase creek to link Beneku community to provide succour to the people of the area who had relied on a local ferry for access over the years.

Governor Okowa said in furtherance of the project, the State Executive Council approved the contract for the construction of the Beneku/ Kwale bridge and approach roads by DNL Engineering Limited under an alternative project financing arrangement with payment by way of Irrevocable Standing Payment Order ISPO for 33 equal consecutive monthly installments of #171,737,453.60 amounting to the contract sum of #5,667,335,967.48.

According to the Governor , the alternative project financing arrangement which is devoid of the usual interest payments associated with such contract financing will enhance the timely completion of the project remained at no extra interest cost to government.

He said it will facilitate better access to Beneku that has significant economic relevance as one of the state’s oil and gas communities  .

Governor in the letter noted that the proposed ISPO would not become operational until seven months after the project commencement when the first phase of the project  would have been completed.

The Governor said the purpose of the letter was to seek the authorization of the House for the issuance of an ISPO for 33  equal consecutive monthly installments.

The Majority Leader, Hon  Tim Owhefere moved separate motions for the House to receive the letter for further consideration and approval of the request and was seconded by Hon. Shola Daibo and the Deputy Speaker, Rt  Hon. Friday Osanebi and adopted.

Also at plenary, the House approved the request of the State Governor, Senator  Dr Ifeanyi Okowa for the construction of 5.085KM  made up of 13  roads network of paved road using HFT concrete stones in the state.

The Governor in a letter to the House said in consideration of the pivotal role of Warri as the commercial nerve centre of the state, strategic roads in flood prone areas have been identified and selected for construction in Warri.

According to the letter read by the Speaker, Rt  Hon Oborevwori said the State Executive Council at its 23rd  meeting of 2018 approved the contract for the construction of 13  roads in Warri at the cost of #1,654,098,004.13 to be executed by Messrs NIP Crown Limited using HFT interlocking concrete paving stones .

Governor Okowa said the letter was to inform the House that the funding of the contract is to be done through a contract finance model with an Irrevocable Standing Payment Order ISPO of #91,894,333.56 monthly for a period of 18 consecutive months, commencing the month after issuance of a practical completion certificate.

The Governor noted that the purpose of the letter was to seek the authorization of the House for the state government to issue an appropriate ISPO in favour of Messrs NIP Crown Limited for the full payment of the facility amounting to #1,654,098,004.13

The House approved the request following separate motions moved by the Majority Leader Hon Tim Owhefere for the House to receive the letter for further consideration and approval of the governor’s request seconded by Hon.Emeka Nwoabi and Hon. Johnson Erijo and adopted.

Earlier at plenary, the Speaker,   Rt Hon. Sheriff Oborevwori welcomed members back to plenary and acknowledged the synergy between the three arms of government in the state.

He said the legislature would not have achieved huge success it recorded in the sixth Assembly without the support and understanding of checks and balances by the Executive and Judiciary.