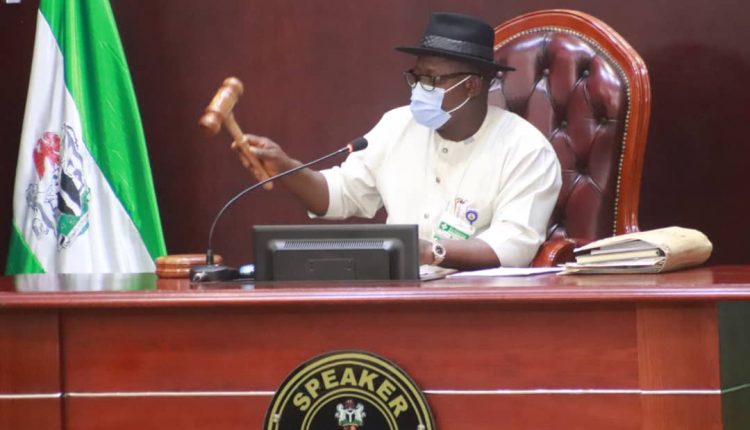 The Delta State House of Assembly has passed a resolution directing the State Commissioner for Transport and other relevant agencies to as a matter of urgency take urgent steps to ease the heavy traffic, regularly witnessed in some major places across the state.

The Member Representing Isoko South two had in his motion, named Asaba end of the Niger bridge on the Asaba-Onitsha expressway, Koka Junction by Road Safety Office, and Ibusa Junction by Nnebisi Road.

Others are Isoko Road junction, in Ughelli, PTI junction by Gbagi Mall, Effurun round about, Effurun, Jakpa  junction and Airport junction in Effurun and other parts of the State where such traffic congestion is also witnessed.

Hon Onwo said there was the need for all relevant Traffic Agencies in the State to take necessary measures in enforcing traffic laws, especially this period of Yuletide.

He stated that  a resolution of the House would help in easing the disturbing traffic congestions in parts of the State.

Hon Onwo emphasized that urgent steps must be taken to address the traffic build ups, explaining that the traffic lock jams most times attract hoodlums and others with bad intentions to carry out their evil acts.

In his contribution, the Member Representing Uvwie Constituency, Hon Solomon Ighrakpata, stated that his Constituency being the gateway to many states always suffers heavy traffic congestions.

Hon Ighrakpata emphasized that traffic control agencies must be made to be up and doing, particularly this period of the Christmas and new year celebrations.

In his amendment to the motion, the Member Representing Ughelli South, Hon Reuben Izeze, stressed the need for the State Ministry of Transport and other relevant agencies in charge of traffic control in the state to enforce all traffic laws in the State.

The motion was unanimously adopted when put to voice votes by the Speaker, Rt. Hon. Sheriff Oborevwori who presided over the plenary.