DELTA ASSEMBLY  CALLS ON GOVERNOR OKOWA TO INTERFACE WITH NAMA TO LIFT SUSPENSION ON AIR TRAFFIC SERVICES AT  OSUBI AIRPORT. 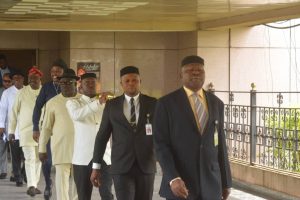 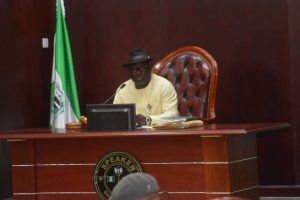 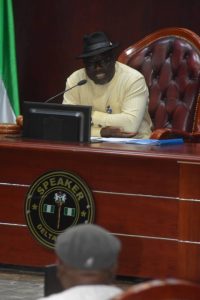 The Delta State  House of Assembly on Thursday, October 18, 2018, adopted a motion calling on the State Governor, Senator Ifeanyi Okowa to interface with the Federal Ministry of Transport to prevail on the National Airspace Management Agency to restore air traffic services at the Osubi airport that is causing untold hardship occassioned by the withdrawal of air traffic services since September 3, 2018.

The motion was moved under motion on notice by the member representing Ughelli South constituency, Honourable Reuben Izeze seconded by Honourable Orezi Esievo.

Opening debate Honourable Izeze said though the issue of airport management was under exclusive legislative list, the primary purpose of government as enshrined in the constitution of the Federal Republic of Nigeria 1999 as amended is the welfare and security of the people .

He said the withdrawal of air traffic services at the Osubi airport without any specific reason had made air travel difficult for people in Warri and its environs.

Other Lawmakers including Honourables Tim Owhefere, Anthony Elekeokwuri, Orezi Esievo and Johnson Erijo argued that the governor should interface with the Federal Ministry of Transport as the withdrawal of air traffic services at the Osubi airport was affecting the economy of Warri based on its strategic place in the nation’s oil and gas sector which is the main revenue earner for the country.

The lawmakers said the move by the federal government had make life difficult for oil companies who use the airport to transport their personnel to offshore areas  .

They asserted that Warri plays crucial and vital to the economic life wire of the state and country as people now use the Benin, Port Harcourt and Owerri airports hence making life difficult .

The motion was adopted when put to a voice vote by the Speaker, Honourable Sheriff Oborevwori.

The suspension followed a motion to that effect by the Majority Leader, Hon Tim Owhefere seconded by the Deputy Speaker, Rt Hon Friday Osanebi and adopted.

Hon Owhefere said the motion became necessary following the character being displayed in recent times by Honourable Daubry which was unbecoming of a lawmaker.

He said the sanctity of the House must be respected at all times by members stressing that as a lawmaking House members should live up to expectation.

The Majority Leader argued that all members must  improve on the sanctity of the House the way they met it or at least retain it.

He said Honourable Daubry had behaved in a manner that was unbecoming of a lawmaker of the House hence the need to suspend him.

The motion was adopted when put to a voice vote by the Speaker, Honourable Sheriff Oborevwori.