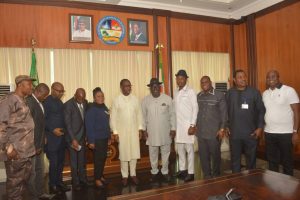 THE Speaker of the Delta State House of Assembly, Rt Hon Sheriff Oborevwori has said that the State has made tremendous progress at 27 and there is course to roll out the drums for celebration.

In a Press Statement by his Chief Press Secretary, Dennis Otu,  the Speaker scored  the State high at 27,  saying that the future was bright for the State and enjoined Deltans not to relent in their total  support to the administration of Governor Ifeanyi Okowa so as to enjoy more dividends of democracy in the years ahead.

Congratulating Deltans on the 27th anniversary of the State creation, the Speaker urged them to sustain the prevailing peace in all parts of the State.

According to him ;” The strength of Delta State today at 27 years is our Unity and so I am using this occasion of our anniversary to call on the good people of Delta State   to continue to live at peace with one another. We can achieve so many things in the state when we remain united. We cannot afford to fail our founding fathers. We should maintain the existing ethnic harmony in the State as this is the only way to attract more investors and development  to the State”

The Speaker added that;” At 27 years of creation, we have every reason to roll out the drums to  celebrate in Delta State and as we mark another anniversary of the creation of our dear state,  my assurance to Deltans on behalf of the  State  Legislature is that, we  will  remain  focused, very articulate and we are going to do very well in the days, weeks, months and years ahead. Deltans should expect more robust debates.  We will continue  to dwell more on people oriented  bills and  also give adequate attention to our oversight functions and sustain the cordial relationship between the Executive and the Legislature. We will continue to work round the clocks for more Bills to be passed and assented to”.