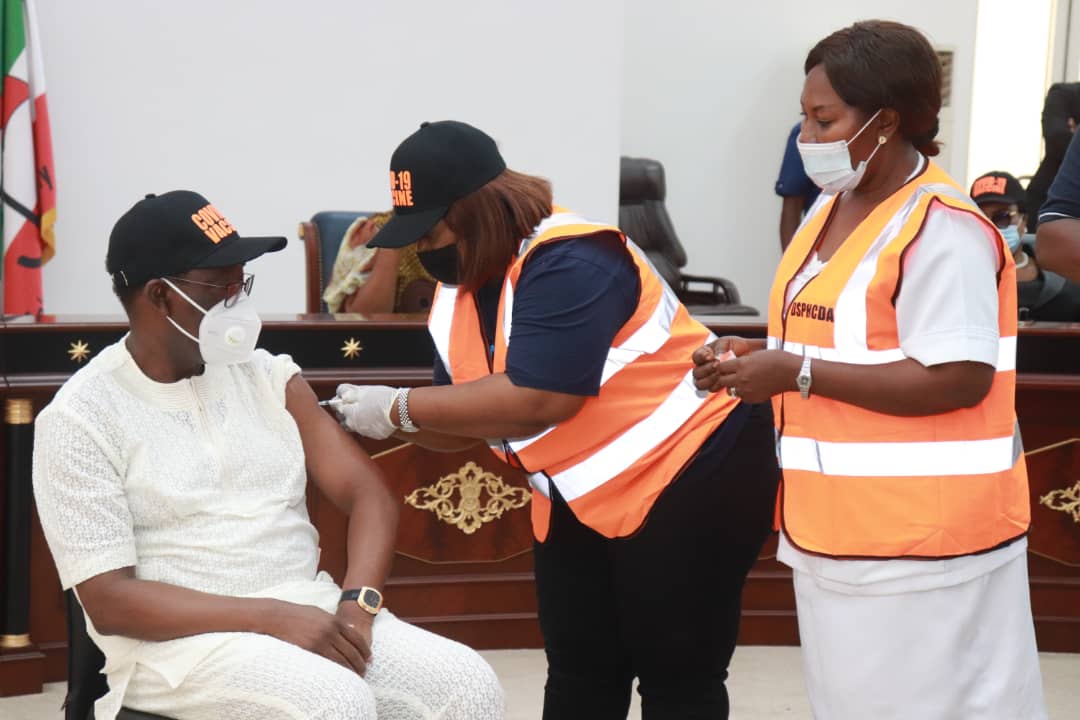 Delta Government on Friday commenced the vaccination of its citizens against COVID-19, with Governor Ifeanyi Okowa, his wife, Edith and members of the state’s Executive Council taking their turns.

The Speaker of the state’s House of Assembly, Chief Sheriff Oborevwori, President of the Customary Court of Appeal, Justice Patience Elumeze and health workers were also vaccinated in the exercise which was held at the Executive Council Chamber, Government House, Asaba.

Speaking after he was vaccinated, Okowa said that the vaccine was approved by World Health Organisation (WHO) and National Agency for Food Drug Administration and Control (NAFDAC) and encouraged the people to take it.

He assured the people of the safety of the vaccine, adding that more doses would be delivered to the state in April and more in later months.

Okowa stated that the more people were vaccinated, the more the immune system of the people would be boosted.

He said that the effect of COVID-19 had been very disastrous to the health and economy of the nation, but expressed happiness on the arrival of the vaccines.

“I am glad that we have finally commenced the vaccination of our people with vaccines approved by WHO and NAFDAC and I want to encourage our people to take it because the vaccines are safe.

“Personally as Governor of Delta, I have received my own shot as well as my dear wife, the honourable Speaker of the State House of Assembly and members of the State Executive Council.

“Yesterday night I was in a virtual meeting with the Presidential Task Force on COVID-19 and the Director General of the National Primary Health Care Development Agency and we discussed at length issues surrounding the vaccines and I can assure you that measures have been put in place to address these concerns.

“We want to reassure our people that the vaccine is safe and that they should ignore the various social media reports.

“There is no doubt that in every drug and vaccine it is possible to have side effects; it is something that is common, but particularly about this Oxford-AstraZeneca COVID-19 vaccine has been approved by WHO and NAFDAC.

“It has been applied in so many countries with over a 100 million doses of the AstraZeneca administered worldwide.

“This particular vaccine was found to be much better for us as a nation because of the storage possibilities in Nigeria and I am aware we have such cold-chain facilities across the nation. It’s important that we encourage our people to take it because it’s safe,” Okowa stated.

Earlier at the official roll out of the COVID-19 vaccination at the Asaba Specialist Hospital, the Commissioner for Health, Dr Mordi Ononye, thanked health workers who had worked tirelessly to ensure that Deltans were treated appropriately.

“Two days ago, we received from the Federal Government 85,700 doses of the COVID-19 vaccine as a first supply for the first dose to be given to persons to be categorised as front line workers, strategic leaders and others.

“The vaccine improves the level of immunity of the individual and even when a person is infected, the severity is much more less,” Ononye added.

Chairman, Delta State Primary Health Care Development Agency, Dr Isioma Okobah, said the roll out of the COVID-19 vaccine was a great scientific achievement for the state and Nigeria having witnessed the devastating effect of the pandemic on the citizens.

She called for equitable distribution of the vaccines to all local government areas.

“COVID-19 is a devastating pandemic which has taken a toll on human lives and the global economy and we are glad that the vaccine remains a powerful tool to bring the pandemic under control,” Okobah said.

The WHO Coordinator in the state, Dr Onyinye Emefiene, commended Delta Government for prioritising response to COVID-19 and pledged the support of the organization and other development partners.