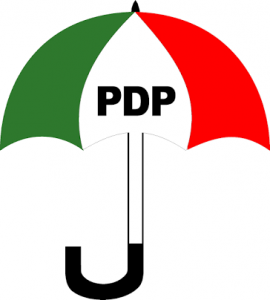 …Says AU Was Misled on Anti-Corruption Award to Buhari

The Peoples Democratic Party (PDP) says the latest report by Transparency International (TI) showing that corruption has worsened under the President Muhammadu Buhari-led administration has vindicated its stand that the current APC-led government is inherently and overtly corrupt.

PDP National Publicity Secretary, Kola Ologbondiyan, in a statement on Thursday, said the TI report has exposed the fact that those parading daily as champions of anti-corruption are rather superintending over the worst kind of official sleaze and hypocrisy in the history of our nation.

The party said the APC administration has been deceiving Nigerians with a ‘holier than thou posturing’ and painting others black when it is swimming in forms of corruption that is eminently festered by official concealment by the Presidency.

When the PDP first alerted that the APC and its incompetent Federal Government were swimming in an ocean of concealed corruption, many did not know to what extent.

It is shocking that under our ‘saints’, Nigeria has moved significantly from the 136th it ranked in 2016 to 146th in 2017, with President Buhari presiding on our nation.

This is a government that has been providing cover for its corrupt officials while operating heavily on propaganda, persecution  of opposition members with fabricated charges and toiling to sway the people with false performance indices.

This is a government that offered protection to former APC governors who were accused of stealing money meant for the development of their states to fund the 2015 APC presidential campaign, and even rewarded them with ministerial appointments.

We challenge the APC and the Presidency to speak out on this TI report. What have they to say when the world is now aware that they are complicit in humongous sleazes including the leaked official memo showing underhand oil contracts to the tune of N9 trillion ($25billion dollars) at the Nigerian National Petroleum Corporation (NNPC) and the Ministry of Petroleum Resources which are under purview of President Buhari as Petroleum minister?

What has the APC government to say when the world is aware that it is complicit in shady oil subsidy deals amounting to trillions of naira by its cabal who has also been fingered to be behind the illegal lifting and diversion of crude worth N1.1 trillion to service APC interests?

As we speak, the APC administration has increased taxes, levies and tariffs without a transparent remitting regime while funds said to have been recovered in the anti-graft war have not been adequately accounted for.

Instead, the government has been peddling false figures and bogus claims to hoodwink Nigerians while its cabal continues to fritter away funds meant for the good of the people.