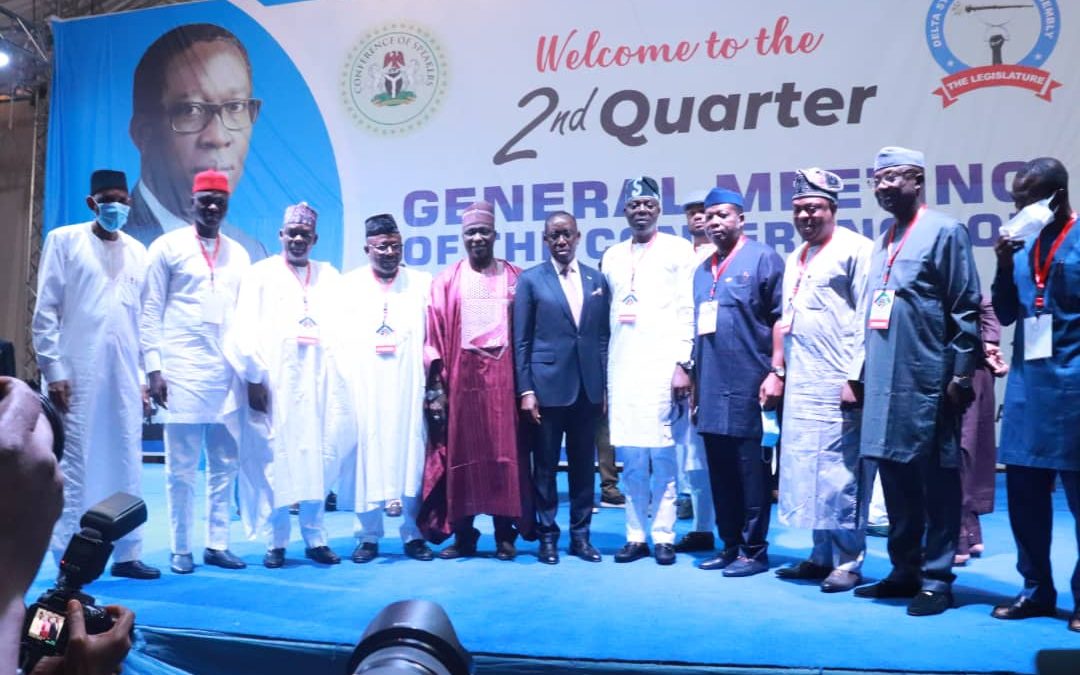 The Conference of Speakers of State Legislatures of Nigeria has decried what it called the rising spate of insecurity in the country.

Rising from its Second Quarter General Meeting in Asaba, the Delta State capital, on Saturday, June 26, 2021, the conference in a communique signed by its Chairman and Speaker, Bauchi State House of Assembly, Rt. Hon. Abubakar Suleiman called on the major Stakeholders to use the instrumentalities of the ongoing review of the constitution of the Federal Republic of Nigeria to accommodate Community policing and State Police in the country.

This, according to the communique would help in effectively tackling the rising wave of insecurity currently bedevling the nation.

While commending the efforts of the Delta State Governor, Senator Ifeanyi Okowa and the Speaker of the State House of Assembly, Rt. Hon. Sheriff Oborevwori for hosting the meeting to discuss a wide range of issues affecting the nation, also commended the State Government for implementing financial autonomy of the Legislature

The communique reads in part; “The Conference, again, decries the spate of insecurity in the Country; and while commending the Federal Government on its efforts at fighting the insecurity in the Country, the Conference calls on the major stakeholders to use the instrumentality of the ongoing Review of the Constitution of the Federal Republic of Nigeria to accommodate Community Policing and State Police in the country to effectively tackle the insecurity bedeviling the country.

“The Conference commends the Governors that have commenced the implementation of the financial autonomy in their states while urging the other state governors to follow suite as agreed in the Memorandum of Action signed by all the Stakeholders.

“The Conference also calls on all the state Houses of assembly to pass Funds Management Bill for Assent of the Governors within the Fourty-Five (45) days window as agreed to by all the Stakeholders.