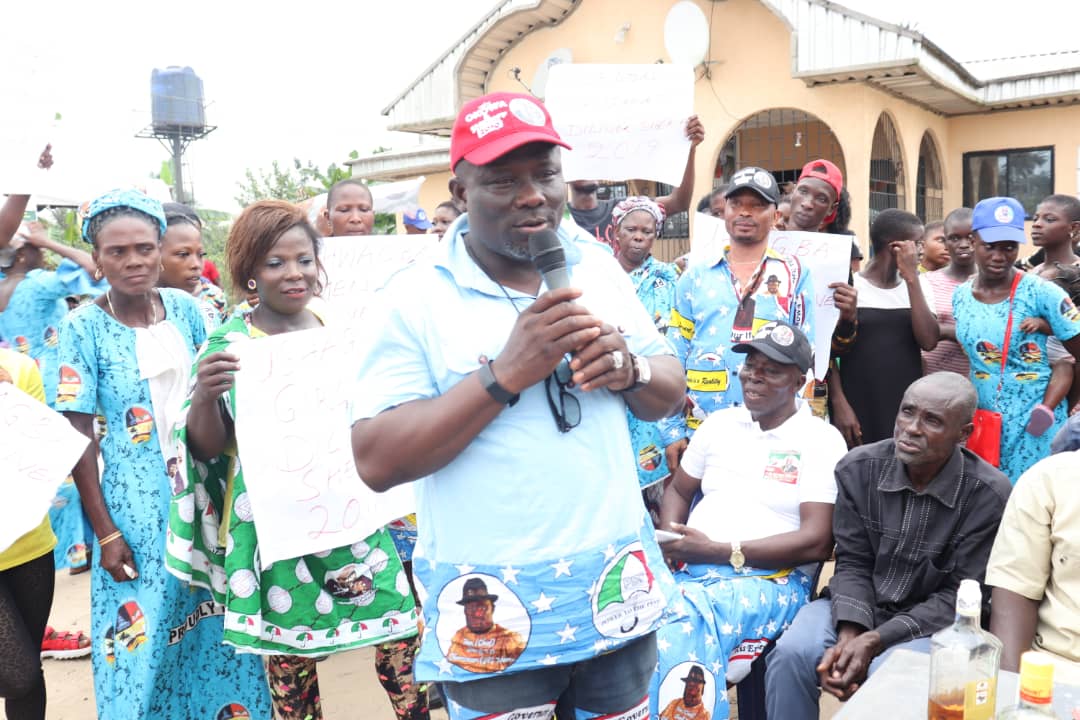 Delta Speaker, Oborevwori, a candidate of the party for Delta State House of Assembly, Okpe state constituency, was on ground for the campaigns.

At Amudiemo, members of the community and party faithful, came out in large number to welcome the campaign train into the community.

At Amutaire, the campaign train was received into the community with jubilation. Addressing the party, the community chairman, Mr Wilson Okpako, eulogised Oborevwori, for extending his various empowerment programmes to the people of the area.

He added that, they have benefited from the Delta Speaker and therefore will return him, Okowa and all PDP candidates in general elections.

The campaign train was given a warm reception at Evwriyen, where men, women and youths came out to receive the campaign team.

Speaking for the community, Mr John Egboro, thanked PDP leaders for the provision of a Transformer and other dividends of democracy for them. He also said the camp of the opposition in the area has depleted
significantly.

At Amuokpokpor, the train was received with joy and merriment. Mr Jose Eseamuo, chairman of the community, expressed appreciation to Oborevwori for the renovation of Erivwode Primary School, Amuokpokpor. He said with the renovation, children who are presently out of school will resume their studies soon.

The train was ushered into Ogiedi community with canon. The President General, Mr Daniel Ayamu said Oborevwori is a son of the soil and therefore will get their total support and votes. He also promised that PDP will surely come victorious in all elections.

At Amughele, the chairman, Mr John Ebrudagbon, said the PDP will win the elections overwhelmingly. He added that no amount of money can buy the conscience of the electorates.

At Adagbrassa community, in a rare show of gratitude, the community through Chief Barr. Isaacs Itebu, a native of the town, presented a letter of appreciation to Oborevwori and Afe for their support towards the development of the community. Also addressing the PDP family, Dr Phillip leleji, a community leader, said the PDP Government has executed numerous projects in the community, he opined that PDP has no rival in the general elections.

At Ughwagba community, the chairman, Mr Wilson Ivwighren, who address the party on behalf of the town, said the Speaker restored their transformer after two year in total darkness. He added that the people will vote all PDP candidates enmasse, from the House of Assembly to the presidential election.