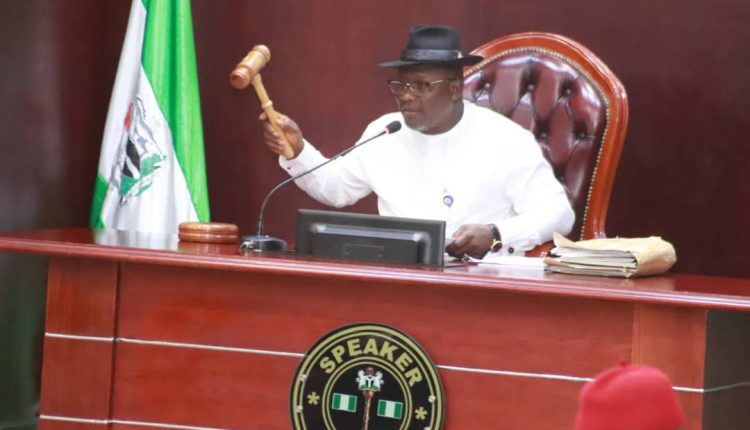 *** Oborevwori Describes Passage Of Bill  As Achievement To Seventh Assembly

The Delta State Governor and Deputy Governor Pension Rights and Other  Benefits Amendment Bill,  2019  has been read the third time and passed by the State House of Assembly.

The passage of the bill which seeks to accommodate former Acting Governor in the Pension law, followed a motion to that effect by the House Majority Leader, Hon Tim Owhefere, seconded by the Deputy Majority Whip of the House, Hon Fred Martins and was adopted at Wednesday’s plenary.

The House had at the Committee of whole, chaired by the Speaker, Rt Hon Sheriff Oborevwori, scrutinized the report on the bill by the Joint Committee on Rules, Business, Legal and Judicial Matters and the Special Committee on Bills.

The Speaker, Rt Hon Sheriff Oborevwori while reporting progress on the findings, recommendations and resolutions of the Committee of Whole, commended members for the painstaking attention given to the bill.

He said members carefully scrutinized the bill and commended them for participating in the exercise,  adding that; “Esteemed Colleagues, at the Committee of the Whole of the  Delta State Governor and Deputy Governor Pension Rights and Other Benefits (Amendment) Bill, Members carefully scrutinized the Bill and made vital contributions that were very useful in the consideration of the Bill. I thank you for making the Committee of the whole a success”.

According to him, the third reading and subsequent passage of the three clause bill was another milestone in the desire of the House in  making laws for  the  progress and good governance of the state.

In his words; “Distinguished Colleagues, this Bill has been passed in recognition of the hard work put in by meritorious men that have been saddled with the job of holding the reins of the affairs of the State. The passage of this Bill is not only apt but an achievement to the Seventh Assembly. I thank you for recognising the importance of this Bill and for your support and contributions throughout its consideration”.