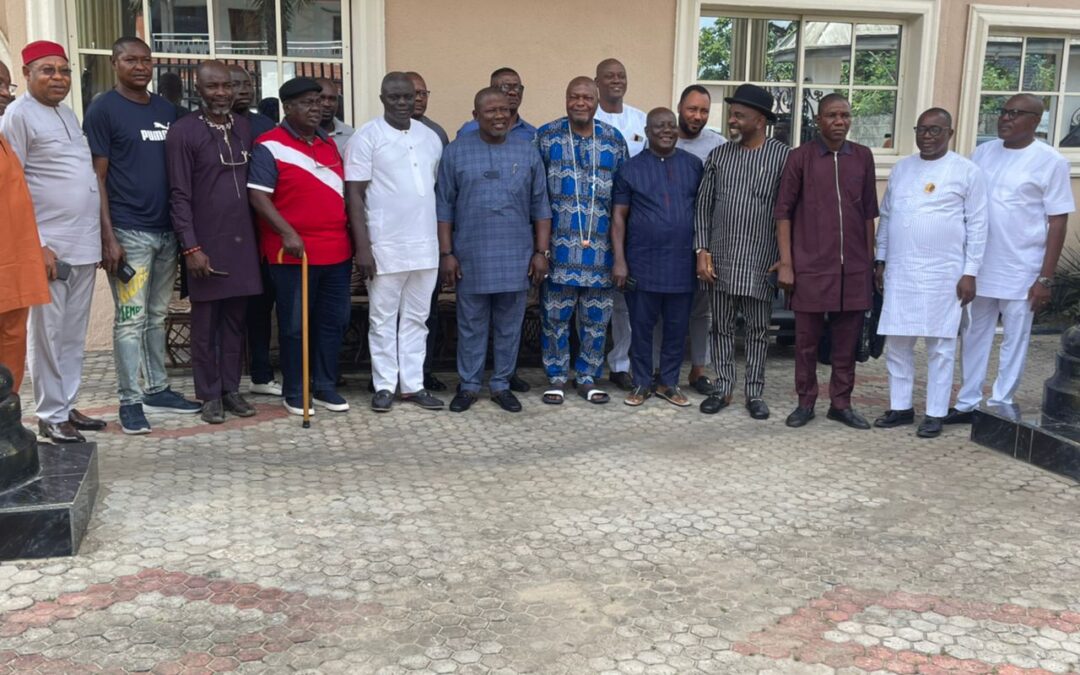 *** Urges Delegates To Deliver Him At Primaries

Delta Political Monitors, DPM, Wednesday declared support for the Speaker of the Delta State House of Assembly, Rt Hon (Chief) Sheriff Oborevwori on his Governorship ambition under the platform of the People’s Democratic Party, PDP.

The political pressure group which membership are drawn from strong political actors across the twenty five local government areas in the state, declared that the Speaker has been tested and trusted to navigate the affairs of the state from where the incumbent governor, Senator (Dr) Ifeanyi Okowa would stop in May 2023.

Addressing the foremost governorship aspirant and his entourage who paid the group consultative visit in Sapele, the Coordinator of the Delta Political Monitor, Chief Otimeyin Adams, acknowledged the sterling leadership acumen of Rt Hon Sheriff Oborevwori and the need for all Deltans to support his dream to becoming the next governor of Delta State.

Chief Adams said the group has been on ground in the state for a long time, and is working in the direction of its name as members monitor the political space of the state and report back to His Excellency, Senator (Dr) Ifeanyi Okowa.

The Itsekiri born politician and former Council Boss, further noted that the group is made up of eminent personalities across the state who are politicians and key players in the socio economic and political development of the state.

“The choice of the Rt Honorable Speaker, Chief Sheriff Oborevwori for adoption as the next governor of Delta State was for the overall interest of Deltans and development of the state. Sheriff has been a major factor in the peace, progress and growth of Delta State. He is most qualified to continue from where His Excellency, our dear governor would stop on 29 May 2023. We have adopted him as our candidate in the elections”, Chief Adams stated.

While declaring the group’s total support for the victory of Sheriff Oborevwori both at the party’s primary and general election, the coordinator enjoined PDP delegates for the governorship primary to vote enmass for the Speaker as he is most qualified to steer the ship of governance in the state come May 2023.

Others who spoke promised that the group will continue to mobilize support for the Governorship ambition of Rt Hon Sheriff Oborevwori, saying that if he emerges the next governor of the state, Delta will witness enhanced peace, unity, good governance and development.

They urged him to remain focused on his dream to serving the state as governor and never to be distracted by the antics of distractors who are bent in drawing the state back.

Responding, Rt Hon Sheriff Oborevwori thanked the group for the warm reception and unalloyed support, promising not to fail Deltans if elected as Governor of the state.

He explained that his campaign is anchored on the MORE AGENDA as he was prepared to listen more, do more and achieve more for the state and its people, saying that focus would be on standards and accelerated growth of all sectors of the state economy.

The frontline governorship aspirant who is presently the National Deputy Chairman, Conference of Speakers of State Legislatures in Nigeria, solicited the support of all critical stakeholders in the development of Delta State, stressing “as a man who understands the social, economic and political environment of the state, i will make the state stand out in the comity of states. Our amiable governor, Senator Dr Ifeanyi Okowa has done much by bringing prosperity to the state, I will build upon the solid foundation already laid”.

Rt Hon Oborevwori commended the caliber of persons and spread in the membership of the Delta Political Monitor, DPM and urged the group to remain united and focused in its efforts to promoting peace, good governance and development in Delta State.